The confidence that Hays Australia/NZ has in the market conditions, continuing their strong run, is amply demonstrated in their September quarter recruiter hiring surge as detailed in the Hays Q1 Trading Update.

Hays reported “Consultant headcount in Australia &amp; New Zealand was up 7% in the quarter”. According to my calculations (Hays do not release actual consultant or employee numbers in Australia, only regional headcount), Hays ended the most recent financial year with just over 900 consultants across Australia and New Zealand, hence a 7% rise in consultant numbers equates to a net gain of approximately 65 consultants, exactly one additional consultant for each working day of the quarter.

This is an impressive rate of growth and given how quickly Hays reign in hiring and cut underperforming consultants in a slowing market you can be very sure that whatever lead indicators Hays are using for 2018 the lights are showing green.

The continued strength of the Australian and New Zealand property and construction sector has been a core reason for the impressive rate of growth reported by the local operation of Hays plc, although Hays’ New Zealand division remains a drag on net fee and operating profit growth.

For the 2017 financial year, net fees in Australia were up 13% while net fees in New Zealand went backwards 4 per cent, even more concerning for the Hays New Zealand business was the 8% decline in Q1 2018 results.

The Hays Australia/NZ growth was powered by temp recruitment (66% of total net fees) growing by 13%, while perm placements (34% of net fees) increased by 8%.

# calculated on consultant headcount data changes as listed in the Hays Annual Report using the reference point of the Aus &amp; NZ combined headcount of 706, as at 30 June 2010 (ShortList, 3 September 2010).

On a state-by-state basis the net fees results were reported as follows: 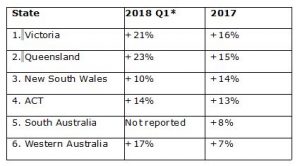 The third largest employing industry in Australia is Construction, and you would have to have been on Mars over the past year to not know how hot the property sector has been.

Hays have been able to take advantage of this market strength with the continued strong performance of their largest specialism: Property & Construction.

Whichever way you cut the cake, Hays Australia/NZ Managing Director, Nick Deligiannis, continues to deliver outstanding results. The recent losses of senior executives Peter Noblet (15 years at Hays, now COO of Interpro) and Jim Roy (15 years at Hays, now Canberra Director of Michael Page) might be minor disappointments for Deligiannis but his local executive leadership team has plenty of depth and there is no shortage of ambitious high performers rising through the local ranks.

Hays may not be everyone’s cup of tea but a healthy and optimistic Hays Australia in an aggressive hiring mode signals that there should be good times aplenty for the local recruitment industry as we head into 2018.

Hays: A top 10 performing Australian business across all sectors