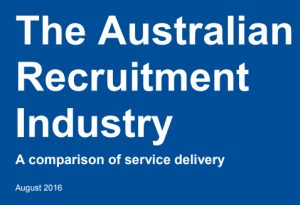 A couple of years ago the Federal Government commissioned professional services firm, KPMG to examine and report on the differences in practices between the Australian commercial recruitment sector and the government-funded recruitment sector (jobactive) to see what can be learned.

The report, The Australian Recruitment Industry: A comparison of service delivery, was provided to the Government in August 2016 and released publicly in May 2017. It went under the radar for most of the industry, with not even industry news service, ShortList, reporting on its existence or conclusions.

Given that precisely nothing appears to have been done by the Federal Government as a result of this report, makes me wonder why the government paid KPMG $250,000 to produce it. As the report makes quite clear, there is much to be desired in terms of substantial data available on the recruitment industry, hence drawing accurate conclusions about the industry as a whole is fraught with danger.

The credibility of the report is highly questionable given that under ‘Peak bodies representing the Australian Recruitment Industry’ the report lists only the RCSA and AHRI(?) and fails to mention APSCo (formerly ITCRA)!

At just over 100 pages it’s a pretty long report with a lot of data, charts and economic jargon to wade through. I’ve saved you the time and pulled out a few bits of relevant information to highlight.

Bear in mind that the report was written two years ago hence the most recent data is for the 2015/16 financial year and things have turned significantly brighter for the sector since then.

Over 6,990 recruitment organisations (encompassing all parts of the industry from jobactive to search firms) generate $11.2 billion in revenue, employ 92,100 people and fill approximately 15% of all job vacancies in Australia.

The four largest Australian recruitment agencies are expected to account for approximately 14% of total industry revenue in 2015-16.

The number of recruitment agencies operating in New South Wales is comparably higher than the percentage of the population that reside there. One factor contributing to this is that New South Wales has the highest proportion of a working age population (those aged 15-64).

There does not appear to be a strong correlation between which markets use the recruitment industry, compared to industry employment levels and industry jobs creation.

Take the Construction industry as an example: It is the fourth largest employer (8%), had moderate-low job growth in 2015 (5%), but is the largest user of the recruitment industry (21%).

Rounding out the top four sectors as users of recruitment agencies we have Healthcare and Medical (12%), IT & Telecommunications (12%) and Hospitality, Tourism and Travel (10%).

In the nine years since 2007/08 the results in the recruitment industry’s two major top line economic indicators have been: Revenue 0.73%, Value Added 0.36%, showing that revenue is significantly more volatile than value added implying that profits have absorbed a large portion of the revenue volatility.

There is some evidence that growth in the Australian recruitment industry is heavily leveraged to the GDP growth cycle with relatively small changes in GDP growth appearing to drive large changes in the industry’s value added growth.

The Australian recruitment industry’s value added is most highly correlated (0.81) with the construction sector’s value added (of the 19 sector classifications used by the ABS). The next highest correlation is with Other Services (0.56).

Over the limited sample of five years from 2011 to 2015, the proportion of recruiting employers using private recruitment agencies or labour hire firms has fallen from just over 12% at the start of this period to about 8% by the end. This appears to be inversely related to the rate of unemployment; as demand for labour weakens so too does the demand for the services of a recruitment agency.

The NAB Business Confidence Index (BCI) is a measure of business confidence published by the National Australia Bank. Data suggest that the headline NAB BCI is a reasonable leading indicator of revenue growth in the Australian recruitment industry.

1) The direction and strength in construction sector value-add provides a strong lead indicator for the recruitment sector.

2) Take annualised GDP growth and multiply it by 4 to give you the minimum level of annualised growth you should expect in your agency’s gross profit.

4) 85% of vacancies that were filled in Australia last year were not filled by the recruitment sector, equating to a total potential market of over 2 million more jobs per annum for our sector to fill!

The outlook for the recruitment sector remains very healthy, as long as the economy continues to grow at its current rate; no matter what potential threat recruitment technology ‘disruptors’ might be.