I was a consultant in the Temporary Solutions Sydney temp accounting team and Mark has been hired to work on the North Sydney accounting temp desk which was situated in the same office, at Level 12, 275 George Street. Mark had given up his going-nowhere career at Deloitte as a cadet accountant (failing your Professional Year exams is never received well) and thrown his lot in with, what would later become known as, Recruitment Solutions.

The accompanying photo of Mark, taken by me in 1995 gives you a snapshot into the 25 year old Mark. He always had a smile on his face and he was constantly distracted by the many temptations of Sydney’s social life, in this case; the movies.

Although I was four years older than Mark we were both Geminis and had grown up in similarly stable, solidly middle class families in the regions of Australia (me in Hobart, Mark firstly in Warialda, in central western NSW, then Port Macquarie, on the NSW north coast).

I became Mark’s direct manager in late 1995. Like almost of all of my colleagues, I got on well with Mark and enjoyed his company but it was hard to tell whether he was serious about a career in recruitment.

Late in 2004 Mark and two Recruitment Solutions colleagues; Manda Milling and Simon Gressier, left Recruitment Solutions. In February 2005, with the addition of Greg Savage as a non-executive director, they opened the doors of people2people together with founding employees Kirsten Garrett and Maria Mexis (who, devastatingly, passed away earlier this year due to breast cancer).

It’s now two weeks short of the 14th full financial year of people2people’s life and the continued growth and profitability of the company has it in elite company with respect to Australian recruitment industry peers.

Last financial year the company grew revenue 27% to reach $92 million, up from $72 million in 2017. Based on a similar profit growth line last year’s pre-tax profit would have been approximately $4 million although given the extra costs of new offices opened in both Perth and  Auckland during the 2018 financial year I suspect the figure was closer to $3.5 million.

Extrapolating the same growth to the current financial year I expect sales are going to finish in the range of $110 million to $115 million although pre-tax profit is unlikely to keep pace with revenue growth given an additional new office has just been opened in Adelaide.

people2people has won the Recruitment International’s Growth Award twice in the past three years.

Five weeks ago industry news service ShortList reported people2people’s current headcount as 110 with “Our strategic objective is to be a nationally footprinted alternative to the large multinationals.” being attributed to Mark Smith in the same news item.

As the Managing Director of people2people for almost the whole of its existence Mark Smith is clearly demonstrating outstanding leadership, although Mark would be the first person to acknowledge the contribution of his co-founders and other leaders in the company.

As the history of the Australian recruitment industry demonstrates it’s not hard to build a successful small recruitment agency however the number of agencies that have continued to grow profitably beyond 50 consultants would constitute less than one per cent of the industry.

How does Mark do it? What strengths does he possess that are the hallmarks of a highly effective leader capable of driving the profitable growth of a start-up beyond $100 million sales?

I was curious to discover the answer, especially given Mark’s potential for this sort of leadership was not apparent to me over twenty years ago when I observed him in action every day.

Thankfully Mark’s co-founders and leadership colleagues at people2people were willing to help me.

I invited each of them to rank Mark’s top four strategic leadership strengths, from a selection of nine, based on the 2003 DDI White Paper A Blueprint for Leadership Success and provide me with their own observations having watched Mark closely for many years.

Here are the results:

Unsurprisingly there was almost universal agreement among the respondents in identifying these four imperatives as Mark’s key leadership strengths.

Here are some accompanying respondent comments to put some flesh on the bone of these strengths:

Mark does not make decisions based on short-term financial return alone. He invests in ideas, people and initiatives that support the greater good, and in many cases the rewards have followed much later in $, and sometimes not at all.. but he is willing to try and to experiment. (Greg Savage, co-founder)

He is one of the most innovative thinkers in the recruitment industry, but also grounded with an uncanny love of spreadsheets, numbers and a brilliant grasp of group financials. Mark has the ability to translate sometimes complex concepts and projects into reality by rallying the right team members, empowering them to own their own projects and trusting them to deliver. (Erin Devlin, MD – people2people Vic)

In an industry that suffers from high staff turnover, something we are by no means immune from, Mark will annually host a luncheon at which over 30% of p2p’s workforce are eligible to attend. The `longevity lunch’ is for those employees who have been with p2p for over 5 years. This is an event Mark takes great pride in as those in attendance are invariably people who have bought into Mark’s management style and his vision/drive for a successful business, one in which people can go from working the front desk to being a Director. (Simon Gressier, co-founder)

Given a ‘’sniff’’ of a potential opportunity, Mark is all over it.  He is genuinely excited about new opportunities and sees opportunity in everything. (Ben Wheeler, Director – Queensland)

Mark is an extremely approachable leader that has and ability, to trust, give rope and guidance (if one needs) to thrive, to be successful. He treats everyone like an adult, and gives resources (technology, manpower etc) that everyone needs to succeed. I find it hard to even contemplate working for someone else. (Bianca Luck, Director – NSW)

Mark has always been an early adopter. Our application forms were online, long before our competitors and we were the first users of a cloud based CMS; Job Science, when it launched in Australia (2011). In fact, we all had a giggle when a ‘major player’ announced on Shortlist it had moved to online registrations, about 5 years after we did. (Manda Milling, co-founder)

P2p is where it is today because of Mark’s ability to bring people on the journey with him. People want to work with Mark, they want to take the ride alongside him. He inspires people by always setting the pace in work ethic, integrity and passion, and he invests in people for the long term. P2P people trust Mark, and well they should, he has proven he is worthy of this trust time and time again. (Catherine Kennedy, Director – NSW)

Mark is a true believer in values and ethics and will not wear any adverse behavior to the company’s values and culture. He has demonstrated this by consistently making difficult decisions over the years which have cemented the culture of fair play and ethical behaviour at p2p. (Francesca Arcuri, Manager – Major Accounts, NSW and has also known Mark for 25 years)

I don’t have better words to describe the respect I have for Mark’s leadership than the words I wrote on a card I sent to Mark and his co-founders, Manda Milling and Simon Gressier, after the people2people 10th birthday celebrations they kindly invited me to in 2015.

Many, many recruiters start their own agency. A tiny minority of these owners profitably grow beyond 30 employees while delivering high standards, demonstrating strong ethics, building a culture to be proud of and having plenty of laughs along the way.

The three of you have done that, and continue to do that.

This makes each of you a shining example of what’s possible in this industry.

I have no higher respect for anyone in this industry than I have for each of you. 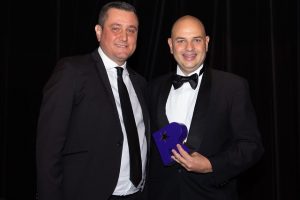