As hard as it is to believe, things have deteriorated further at Rubicor since I last commented on their performance in late February.

On 1 March Rubicor were one of only eleven public companies (out of approximately 2200 listed on the ASX) to have trading in their shares suspended by the ASX for failing to lodge their December half year financial results by the required deadline.

The response of the new CEO (and former Company Secretary) Sharad Loomba to this suspension was quite astonishing. Here’s his explanatory email sent to all Rubicor employees: 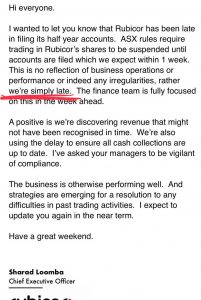 Rubicor’s official ASX announcement of 1 March stated, consistent with Loomba’s email, that “The Financial Statements are expected to be finalised within one week.”

Barely a week goes by without another former Rubicor temp, contractor or employee messaging me about their missing Rubicor superannuation contributions.

Here’s a fairly typical email that arrived in late May, from a former Rubicor temp at a Telstra call centre:

“A few of us realised that we were not being paid our Super and queried this with Telstra, Rubicor and the ATO. The result being we were paid our Super up to the end of 2018 (6 months of payments, but no interest.) Telstra has subsequently terminated the contract (with Rubicor) and we were paid up, but not our Super or any interest owing.

This matter is being followed up by the ATO and, I believe the union. We are currently owed around 4 months Super.”

Here’s the official explanation sent on 11 February 2019 by Rubicor Financial Controller, John Fauvel (who, unsurprisingly, is “seeking new opportunities in Melbourne” according to his LinkedIn profile):

I am writing to you all today to provide you with information on the delayed payment of your Superannuation Contributions to your nominated Superannuation fund.

There has been a lot of discussion, rumours and incorrect information being disseminated about this matter. I would like to take this opportunity to provide you with the current situation, how it came to be, and the plan we have to correct this.

Yes, we are behind in the payment of Superannuation Contributions to a range of internal Rubicor staff and client placed employees across the group. This does not however cover everyone within the group, and the amount of people this covers is reducing week by week. Some employees may not have had a contribution made since May 2018. Whilst others have superannuation up to date.

This situation came about as a result of a significant unforeseen taxation payment required by the parent company of Rubicor Workforce. It was unforeseen that the entire amount outstanding needed to be paid at once particularly as there had been discussions regarding the possibility of making payment in instalments.

As this was not able to be undertaken in instalments, the payment had a huge impact on operational cash flows across the group and we therefore did not have the available funds to satisfy all payments for other matters across the group of companies we operate.

At the group level, the Directors decided that it would not enter into a debt arrangement to raise the working capital that would have been required to extinguish the amount of the contributions outstanding. This ultimately was the right course of action to relieve undue pressure on cash flows.

We then decided that we would use our existing flow of operational working capital from ongoing business operations and pay down the amounts owing systematically. This action requires the constant monitoring of cash flows across the group and for this reason has been taking longer than we had estimated to pay off the entire amount. We’re making inroads to reduce the amount owing.

To avoid a recurrence of this situation in future, the Directors of the group are reviewing operational structures with a view to streamlining them. They are taking external advice to ensure that options are fully investigated, reviewed and measured across a range of factors that will correct processes.

I understand that it’s disappointing that we are in this current position; albeit working through it systematically. Please know that the work that you are currently doing with Telstra is valued by Telstra, and has not contributed to this situation at all.

I currently cannot fix an exact date by which your personal contributions will be fully paid, but we are making payments on a weekly basis. I will provide further information in the near future on this matter, and apologise for the delay. Please be comforted that the business is operationally sound. (oops, John forgot to mention the bit in the 2018 annual report where Rubicor’s auditors “….cast doubt about the Group’s ability to continue as a going concern”).

Missing from Fauvel’s email was any acknowledgment of, or apology for, the lack of timely notification to the workers whose superannuation payments had been “delayed”.

This from a company whose Chairman is a Chartered Accountant and the CEO is the company’s most recent Company Secretary!

Meanwhile there’s been not a single ASX announcement from Rubicor for more than three months. Their shares remained suspended from trading and shareholders can only wonder about the extraordinary level of incompetence and delusion that it takes to drive a once healthy company off a cliff during the greatest bull market the local recruitment industry has ever seen.

Bad news for Rubicor shareholders and staff comes in threes

Gee Ross, you’re detective skills appear to be outstanding. I’d love to have seen you in action searching for a candidate…

As a former employee and current (worthless shares) shareholder I too have been monitoring the situation. There are few jobs on the Rubicor site, the only current ones are from Xpand and several of these are from HK and Singapore. Xpands former offices are still empty in Walsh Bay so I wonder if they will close the Rubicor business, buy Xpand from the administrators and set up back in their former offices.

Ross
I would love to get my hands on this outfit, and sort it out.

Nothing much of value left, I would guess, Jeff.

I was not paid one cent superannuation by these thieves from May 2018 until I joined another labour hire firm.Now I am getting super payments again after getting none for 15 months.The Australian Tax Office have wiped there hands clean of my claim with them because the incompetent company has gone broke and under administration.We were told by the local representative that all super monies had been handed to the tax office.This was months ago.More lies from these hypocrites.