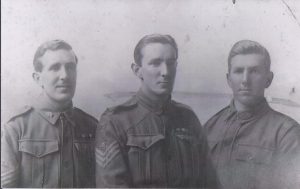 I’ve been in hospital over the past seven days.

Last Wednesday I had surgery to remove a lesion in my large bowel. The lesion was discovered, via a colonoscopy, after I had collapsed in agony at home on the morning of Valentine’s Day. Post-operation the surgeon informed me that he also found, and removed, a small tumour that had been under the lesion.

Thankfully, the subsequent biopsy revealed the tumour to be benign.

The recovery period in hospital did not go smoothly as the recommencement of normal operations in my plumbing department proved to be challenging.

One of the tasks I had set myself during my hospital recovery period was to transcribe my paternal grandfather’s 1918 diary from his time as a soldier during World War 1.

It’s not that his diary entries were illegible however the combination of his cursive writing and the slight smudging of the content over the past 102 years meant it couldn’t be easily read.

Although there were entries for only a minority of days and each day’s musings were a maximum of two sentences it still took me around seven hours to complete the transcription of the whole diary.

Alfred James Clennett was born 25 March 1888 in Dover. At that time Dover was small farming and sawmilling community about 80 kilometres south of Hobart. These days it’s a leisurely drive of just over an hour from Tasmania’s capital however early last century the only access to the town was by boat, via the Derwent and Esperance rivers.

Alf, as he was known, was the third child of four boys and four girls (although two of the girls died in infancy). Af, and his two younger brothers, Guy and James (known as Jim), enlisted in September 1914, two months after war broke out in Europe. At 26 years old, Alf was older than the average age (24) of enlisting Australian men.

As a member of the 3rd Field Artillery Brigade, Alf landed at Gallipoli cove on 25 April 1915. In September 1917 Alf was awarded the Military Medal (“..awarded retrospectively for gallantry and devotion to duty performed by non-commissioned officers and other ranks of the Army.”) and in May 1918 he was promoted to the rank of Sergeant.

Guy was killed in action on 5 August 1916 in France and Jim lost an arm in combat about two months before hostilities ceased in late 1918.

In the current circumstances where words such as ‘crisis’, ‘disaster’ and ‘hardship’ are heavily populating many news reports it’s a sobering reality check to read through a soldier’s diary from the front line, over a century ago. Here are ten extracts from the final six months of Alf’s three and a half years in Europe during World War 1.

At daybreak the enemy made a big attack around Albert. Gave a bit of ground but was driven out again. We had a bad time. Major Garling, Sgt McFarrad & Gordon Isles killed. Several wounded. (Friday 5 April)

Enemy shelled our dugout tonight, killed two men named Erps and Abbott. We were lucky to get off as his range and line were perfect. (Saturday 20 April)

We got a relief today so I went to the waggon lines. Two of the new relief, Whitney & Hawkes were killed about two hours after they arrived. Both were good men & very popular. (Monday 29 April)

We started the attack at 4.20 am. Our part went off well, infantry had little opposition. We advanced through the fog close behind infantry. Prisoners coming from all directions, lots of guns captured. Casualties light. (Thursday 8 August)

This morning I was exploring a German dugout when I ran into a wounded German. He gave me a great scare as it was very dark. (Sunday 11 August)

We pulled our guns out just before daybreak. Got caught in a barrage while doing so. Had two men killed & 5 wounded also eight horses killed. Marched 10 miles & put guns into position in front of Harbonnieres. (Tuesday 13 August)

We started barrage at 5.20 in pouring rain. Moved forward at 9-10 a.m. Everything going well, no casualties today. (Wednesday 18 September)

Was turned out four times during night to shoot. Raining heavily, got soaked to the skin. Had a quiet day later on. Everything going well.  (Thursday 19 September)

Got word to get ready for home as have declared peace for a while. Feel very excited but sorry to leave some of the boys. (Friday 20 September)

Combat for Alf had ceased in late September 1918 although the formal end of the war was still seven weeks away. The remaining diary entries recorded the various landscapes and stops, via train then ship, on his return to Australia.

Alf stepped back onto Australian soil at Portsea on the Mornington Peninsula on Monday 25 November 1918:

After his quarantine period was up, Alf was shipped to Tasmania, arriving back in Dover on 7 December 1918.

A newspaper clipping that Alf kept in his diary reported:

Never has Port Esperance been so gaily decorated and so lively as it was last Saturday afternoon, on the arrival of the steamer Dover, having our distinguished Anzac, Mr Alf Clennett, on board. That was the cause of the great gathering….all were warm-hearted and joyful.

I think all, from far and near were present, in many sorts of vehicles. The Raminea Band was present and played tunes on the arrival of the steamer. There was a grand arch erected at the wharf, gaily decorated with the words “Welcome Home” and flags, in fact our Anzac had to go under five other arches on his way home to “Stanmore”. Flags were shown all the way on both sides of the road.

In the evening the Dover Hall was filled to overflowing, the attraction being a concert.

Alf returned to a life on the family farm and died of a heart attack in December 1950, aged 62. His youngest son, Tony (my father), was just 16 years old.

I am currently in pain and have suffered during the past seven days, subsequent to my operation. The economy is already in pain and there is much suffering ahead for many hundreds of thousands of Australians. As a self-employed person I will undoubtedly have my own difficulties as the economy digests the full impact of Covid-19.

It would be easy for me to consider the various hardships I am enduring and will almost certainly endure in the foreseeable future. Instead my choice is to reflect on the brutal conditions of World War 1 (20 million deaths, 21 million wounded, one in every seven Australians who enlisted were killed) and to reflect on the things I have never done, and will never have to do, thanks to what my grandfather, his brother and many millions of others did during that war.

Things I will never have to experience are things such as embarking on a 20 mile march at night during a French winter; such as receiving the news of a sibling’s death on the front line; such as seeing friends alongside me die in an instant; such as getting up at 3 am to start an enemy attack in the pouring rain; such as confronting an enemy soldier face-to-face, and, mostly, not knowing whether I would be alive tomorrow, let alone in a month’s or a year’s time.

Compared to what Alf went through, I’ve got plenty to be grateful for, regardless of the economic conditions.

Thanks Grandpa Alf; we never met but I thank you for your sacrifice and the lessons you have given me about what being in “challenging times” really means.