The cat was well and truly thrown among the pigeons yesterday when SEEK was the subject of a report by activist shareholder Blue Orca that its legacy job board business is stagnating, its Chinese online recruitment platform Zhaopin is inundated with false and fraudulent postings and it is carrying increasingly toxic levels of debt.

“Zhaopin’s platform is inundated with fake postings by companies which were deregistered, in liquidation or flagged as ‘abnormal operations’ by Chinese authorities,” the report states.

Companies we called about their job postings on the website even stated directly that the posts were fraudulent. Our due diligence also uncovered a whistleblower claim by a Chinese college student alleging that Zhaopin pays people to submit fake resumes. We think Zhaopin’s platform is rotten, which is devastating for Seek’s prospects.

Rather than valuing Seek as a fast-growing online recruiting platform, we value Seek for what it is — a slow or no-growth platform whose core business is shrinking and which carries a dangerous amount of debt,” the report states.

Blue Orca said Zhaopin merited a “substantial discount” and it valued Seek at $7.30 a share, a 69 per cent reduction from its last closing price.

Zhaopin is the foundation of Seek’s share price and, going forward, its ability to service its increasingly toxic levels of debt,” the report states. “We think that Zhaopin has grossly exaggerated its performance and that the platform is worth considerably less than investors realise.” (The Age, 29 October 2020) 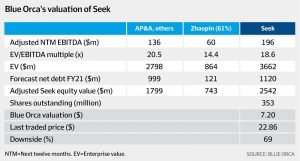 Trading in SEEK shares was halted yesterday afternoon pending an announcement in response to the Blue Orca report. SEEK’s statement to the ASX asserted that it was “…in compliance with its continuous disclosure obligations.”

“…..SEEK’s results clearly disappointed the market as their share price was hammered in early trading, tumbling to $18.55 from a previous day’s close of $21.40. The price recovered somewhat to reach $19.61 by the end of the trading day, a drop of 9 per cent on the day.

Although SEEK hasn’t done badly in the greater scheme of the COVID-impacted economy, clearly investors are nervous about the likelihood of a return to more healthy results in the short term.

A more than four-fold increase in net debt (from $205 million as at 30 June 2017 to $901 million as at 30 June 2020) over the past three years to fund the expansion of existing businesses into new markets and the acquisition of sizeable minority shareholdings in emerging rec tech businesses does not appear to be paying off at a fast enough pace for many SEEK investors.

Despite the disappointing results, there were still some analysts who rated SEEK shares a long term ‘buy’ at the time the 2020 full-year results were made public.

Blue Orca Capital was founded by Texas-based Soren Aandahl in 2018. Aandahl was formerly the Research Director at Glaucus Research Group, where he built his reputation through uncovering what he calls “zeroes,” fraudulent companies with no value.

More recently Aandahl has turned his attention to larger companies where his company’s reports have created mayhem for a number of CEOs, boards and investors.

Aandahl’s research at both Glaucus and Blue Orca has been primarily focused on Hong Kong-based Chinese companies. SEEK is the first ASX-listed company to be the subject of Aandahl’s attention, since Blue Sky Alternative Investments (which lost 85% of its value shortly after Aandahl’s report was issued in March 2018) no doubt due to the fact that Zhaopin, which accounts for 48 per cent of SEEK’s revenue, is Chinese-based (and was formerly listed in the NYSE).

“This is priced as a growth platform but there’s no growth. Where it’s all gone wrong with SEEK is it’s a really high levered roll-up,” Mr Aandahl said.

One agency owner who contacted me this morning speculated that if Blue Orca’s assessment of Zhaopin is accurate then SEEK might find itself with their version of the infamous Salted Gold Mine and the accompanying ugly class action initiated by duped investors.

Obviously, we are a long way from that right now but given Soren Aandahl’s track record you would be a brave investor to be betting that he’s got this one badly wrong.

We do not wish to engage in detail with the self-serving and unsubstantiated claims in the Report and will therefore only focus on addressing the Report’s two main assertions.

We strongly disagree with the Report’s assertions regarding the Zhaopin platform. Zhaopin has been profitable for over 10 years, continues to generate strong operating cash flows and had a net cash position of cA$222m at 30 June 2020 which has enabled ongoing investment in the platform.

We strongly disagree with the Report’s assertions regarding SEEK’s accounting practices. SEEK is consistent and transparent in its application of International Financial Reporting Standards (“IFRS”) and provides additional information to assist all market participants.

Andrew Bassat, CEO and Co-Founder of SEEK said, “We accept that market participants have different opinions, however this report is littered with inaccuracies. We are well positioned for future growth and remain confident in SEEK’s long-term outlook.”

In line with SEEK’s normal practice, we will provide a trading update at the Annual General Meeting on 19 November 2020.

Seek Ltd (ASX: SEK) is a growth stock without the growth. In our investment opinion (the “Report”) published on October 29, 2020, we detailed our extensive investigation indicating that Seek’s most important business, Chinese online recruiting platform Zhaopin, is inundated with zombie resumes and fake job postings.

On November 2, 2020, Seek issued a flimsy, 2-page response (the “Response”) to our Report in which it failed to meaningfully address any of the substantive evidence of fake posts and zombie resumes raised in our Report. Seek even admitted in its Response that it did “not wish to engage in detail” with our allegation. Why not? Because we are right.

Seek’s actions speak louder than its words. Since our report, Zhaopin has removed 64 of the 66 employers on its platforms we identified as likely fake, which we believe is clear validation of our work. Recall that in the markets we sampled, these employers accounted for almost 20% of the posts on these platforms, making it a significant admission of rot on Zhaopin.

In our opinion, Seek refuses to engage with our Report because our evidence is compelling. But investors deserve a straight answer, not a Company which is trying to sweep under the rug a discussion which would obviously undermine the market’s confidence in its critical Chinese platform.

Seek’s only response of substance is that Zhaopin is a “strong business with a long history” because it “continues to generate strong operating cash flows.” Seek argues that investors should have faith in Zhaopin, despite all of our evidence of zombie resumes and fake posts, because it generates cash. But if that is the case, then how does Seek explain the absence of cash flows from the Zhaopin business?

If Zhaopin has really generated so much free cash flow, why does Zhaopin’s indebtedness keep increasing?

If Zhaopin’s business generated so much cash and profits, why would it need to borrow to fund this dividend? Moreover, if Zhaopin has really generated so much free cash flow, why doesn’t it pay dividends upstream to help Seek service or pay down its near toxic levels of debt?

SEEK price rises: you ain’t seen nothing yet