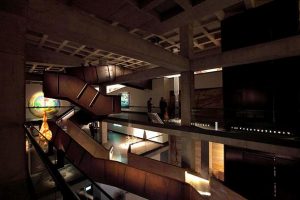 Last Monday my 20 year-old daughter and I visited the Museum of Old and New Art (MONA) in the city of my birth and upbringing.

It’s almost impossible to overstate how transformative MONA has been for Hobart (and by association, Tasmania’s) image and economy.

In the 1980s Hobart’s nightlife options were small in number and modest in ambition. My social life revolved around the Student Union Bar (“the Uni Bar”) and one (Maloney’s) of the city’s four nightclubs (Regines, The Living Room and The Hideaway were the others).

As an economics undergraduate attending the Sandy Bay campus of the University of Tasmania between 1984 and 1988 I was surrounded by peers who, along with me, were explicit and consistent in our desire to escape Tasmania to start our careers. True to form only one of my nine-person economics/commerce friendship group, accepted a graduate job in Tasmania.

There were plenty of pubs offering decent counter meals (as pub meals were called in Tasmania) but fine dining choices could have been counted on the fingers of one hand. Wineries with cellar doors and on-site catering were a decade away.

Economist Saul Eslake’s observation that “Tasmania’s (pre-MONA) image was something of a bogan destination. It was seen as a relatively unsophisticated destination,” would be hard to dispute.

To suggest to the 22-year-old me that an article published on a major US news site titled Why Hobart is Australia’s new capital of cool was anything other than satire would have been scoffed at. Yet that July 2019 article (on the CNN website) has been just one of a number of similar overwhelmingly admiring articles that have been recently published about Hobart, in publications such as The New York Times, no less.

Every article features MONA as the heart of the visitor experience.

MONA’s owner, David Walsh, made his fortune by creating a gambling system that’s delivered astonishingly consistent and lucrative results for many years.

Walsh’s passion as a collector (mostly, but not only, art) soon over-ran his home’s capacity to store his purchases. The original building that housed the first incarnation of Walsh’s public display of his collection, the Moorilla Museum of Antiquities (MMoA), quickly ran out of space and closed in 2006 after a mere five-year existence.

Walsh also quickly fell out of love with the way MMoA, and all galleries and museums displayed art and artifacts.  He wanted the viewing of art to be an immersive and egalitarian experience, freed from the constraints of multi-stakeholder bodies that were tied to the policies, funding caveats, and opinions of government departments, art historians, benefactors, and institutional curators.

Walsh decided to invest tens of millions of dollars to create a completely new home for his vast collection; he was determined to create the ”anti-museum’ that would not merely educate but entertain visitors through the stimulation and elevation of their emotions.

On 21 January 2011 the Museum of Old and New Art opened its doors after the best part of $75 million had been plowed into its construction and fit-out.

Despite Walsh’s modest expectations, the museum has been an extraordinary success. Tasmania’s visitor numbers have risen 49 per cent in the seven years between 2012 (904,800 visitors) and 2019 (1.35 million visitors) with a 2018 survey of visitors to the state revealing that 27 per cent of respondents went to MONA during their trip.

The most compelling evidence of Walsh’s vision having not just been met but exceeded expectations is the average visitor stay.

“Across America, in a study of 100 museum exhibitions, visitors only managed an average tour of twenty minutes.

By contrast, MONSA is making museum history, with visitors averaging tours that are over six times longer than the average- and many stay upwards of five hours. Thirty per cent don’t’ feel am entire day is enough and come back the next day. This is extraordinary by any standards.”

I have been a museum-goer my whole life. Whether it’s been the British Museum in London, the Hermitage in St Petersburg, the San Francisco Museum of Modern Art, or the Egyptian Museum in Cairo, I have been fascinated by antiquities.

Despite that fascination, I have never felt excited about what I had witnessed, and the urge to return to that museum as soon as possible, as I experienced after visiting MONA.

On the ferry trip back to Hobart my daughter and I spoke about what we had seen. That evening we keep talking about it. The next day on the plane home continued our conversation.  We have never had a conversation that long about anything before.

MONA made my experience of viewing art compelling and exhilarating.

In reading Greg Savage’s most recent blog about the re-opening of the Sydney office of national recruitment agency, people2people I was struck by the parallel thinking of David Walsh and people2people group managing director, Mark Smith.

Savage’s blog contains 13 photos that show the p2p office looking more like a WeWork location than a traditional recruitment office with purpose-built Zoom Rooms, a podcast studio, loungers, break out rooms, and a café/bar.

Smith knew that forcing employees to return to the office was unlikely to be the way to go in a post-pandemic environment where good recruiters would have even more choice than ever when it comes to alternative employers.

Creating a modern, vibrant, purpose-built workspace would the best way to make the p2p office a compelling proposition for each employee.

Of course, people2people is not the first agency to blow up the office. Nearly three years ago I visited the new Consult Recruitment office located on the Auckland waterfront, which was set out like an advertising agency. Six years ago Aspect Personnel moved into new accommodation in the Melbourne CBD that was more contemporary than anything I had previously seen in a recruitment agency.

A ‘wow’ physical space does not, by itself, create a compelling employer brand, nor does it fix a dysfunctional culture however it can be a very important piece of the puzzle in building a company that people want to commit to, by staying or joining.

MONA turned the museum visit on its head by transforming the viewing of art from an intellectual exercise to a visceral experience.

People2people, Consult Recruitment and Aspect Personnel are early adopters in re-inventing the recruitment office in making it not just an aesthetically pleasing place to work but a place where employees are fully alive to the possibilities of work being more than just a way to earn a living.

Interview with 2019 RCSA (NZ) Recruitment Leader of the Year: Angela Cameron of Consult