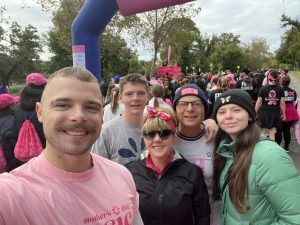 Sunday 8 May was Mother’s Day this year.

​My family accompanied me to the Mother’s Day Classic (MDC) at the Domain in Melbourne (pictured above) and we completed the event along with thousands of other participants.

We participate in the MDC each year in memory of my sister, Mary, who died of breast cancer in 2012, three and half years after she was diagnosed.

I am very happy to report that donations this year currently total $17,163 aggregating to $100,248 raised over the 11 campaigns.

Nationally, I have raised third-highest amount of money by an individual fundraiser in 2022 (massive kudos to both Julie Lander and Lauren Couter, each having raised over $20,000).

You, my clients and subscribers, donated the overwhelming majority of funds.

Thank you. I am humbled by, and very grateful for, your support.

I especially acknowledge Concentis managing director Mark Medelis for his generosity in donating over $10,000 across recent fundraising campaigns.

A single donor contributing over 10% of the total amount raised since 2012 speaks to Mark’s commitment to making a difference in the lives of others through his business success.

NBCF is committed to identifying, funding and championing world-class research – research that will help to detect tumours earlier, improve treatment outcomes, and ultimately save lives. NBCF has raised over $181 million to fund 557 world-class breast cancer research projects in Australia.

Examples of current research projects that are fully-funded by the NBCF are:

For the past few years I have served as a MDC Community Ambassador, which involves being an active promotor of the MDC each year through my networks as well as speaking at fundraising events and being available for media interviews.

It’s another way I can keep my memories of Mary front-and-centre for a few weeks each year.

Mary packed a lot into her 44 years (you can read my eulogy here) and made a difference in the lives of many people.

I hope the $100,000 that we have raised together will also make a difference in the lives of many people – the people who have longer lives because breast cancer research has made those (hopefully, many) extra years possible.

Donations are open until 30 June. If you would like to donate to my 2022 fundraising campaign you can do so here

I look forward to your support for my 12th fundraising campaign in 2023.

Great stuff Ross. Mary would be so proud.

Thanks, Friz. Yes, Mary would be chuffed to know I was taking action to reduce the chances that other families don’t suffer as ours did.

Well done, Ross – this is an incredible effort over 11 years.

Thanks, James. Your ongoing support of my fundraising is much appreciated.

Ross, you are a champion and I agree with Annette – Mary would be so proud of your efforts in her memory. Keep up the awesome work!

Thanks, Deb. I greatly appreciate your ongoing support.