Skip to content
Share
Tweet
Share
0 Shares
Each year, the last day of September brings down the curtain on the financial reporting season for ASX listed companies. Thankfully, for investors in Australian recruitment companies it was a better set of numbers all round than for the previous financial year. Not brilliant by any means, but better.
I thought it might be useful to give you a brief rundown on some of the key numbers.
Here’s a selected summary of these results, with all results being for the period 1 July 2009 to 30 June, 2010 unless otherwise noted. 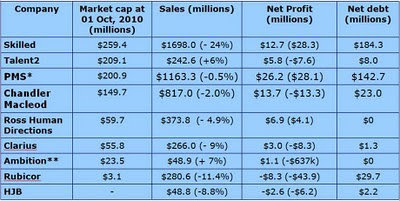 * PMS results are for the full year ended 31 March 2010
** Ambition results are for the 6 months ended 30 June 2010
Note: Data3 and SMS Management and Technology were not included in this analysis as their respective recruitment businesses only represent a small minority of their total revenue
Of course there are plenty of other useful pieces of information when you go looking into the financial statements, like CEO remuneration.
Here’s what the various annual reports told me, along with some share price data: 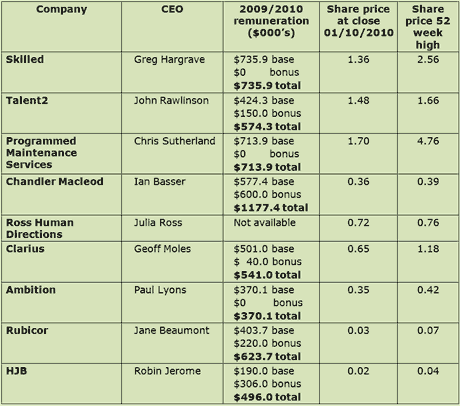 For what it’s worth, here’s my brief commentary on each company’s results:

Skilled :  Formerly the darling of the recruitment stocks, it’s badly lost its way in the past two years. Operating income for 2007/08 was $74 million, this year it was nearly half that figure at $39 million.

Interest payments on their huge debt totalled $26 million and along with overheads continued to kill their EBITDA line. Net profit this year was less than one third of 2007/08’s $39.3 million.

The final straw for investors was a further profit downgrade, issued at the end of April this year when CEO, Greg Hargrave walked the plank. Five months later a replacement is yet to be named. The share price continues to struggle and the new CEO, whoever they are, has a huge job ahead of them.

Talent2:  The current listed vehicle for industry legends, Andrew Banks and Geoff Morgan, is now less a recruitment company than it ever was. The traditional recruitment business dropped revenue by 6% to $107.5 million but sharply lifted the EBITDA line by nearly $10 million, turning last year’s $2.4 million loss into a profit this year of $7.1 million.

Programmed Maintenance Services:  Like Talent 2, PMS provides a number of non-recruitment services to complement their recruitment operations (Integrated). But unlike Talent2, they aren’t making enough profit anywhere in their business to satisfy either analysts or shareholders.

On Friday 1 October, the share price shed another 4.5%, continuing its  recent horror run. The fundamental problem being that their revenue line was grown nearly 400% in three years but their net profit in the same period has risen just 17%.

PMS’s interest costs on their long term debt is proving to be very heavy lead in their saddle bag right now.

Chandler Macleod:  New CEO, Ian Baser’s stonking take-home pay of $1 million-plus, outstripped the earnings of any other CEO by more than 50%. This was due to the juicy bonus he received for quickly turning around the financial performance of CMG after the humiliation of CMG’s brief and disastrous foray into the ADF recruitment contract, won with some fanfare from Manpower.

Ross Human Directions:  A succession of senior executives have come and gone at RHD over the past few years and Founder and major shareholder, Julia Ross is back in the big chair, yet again.

The Navis Capital/Peoplebank takeover is looming and RHD’s long-suffering shareholders will soon be on to greener pastures, much like Julia Ross herself, I suspect.

Since then Candle founder, Geoff Moles has resumed the CEO’s role and has concentrated on reducing costs, paying down debt (through a capital raising) and seeking greater revenue streams in Asia.

Staff turnover across all their brands continues to be a worry and a major bull-run on their shares, this time last year, proved to be temporary.

It’s hard to see where major improvements in the Clarius results are going to come from in the short term.

Ambition:  The double whammy of a large exposure to the UK financial services market, causing top line revenue to drop by 33% between 2008 and 2009, and writing off nearly $30 million in goodwill, has been almost fatal for Ambition.

Co-founders Paul Lyons and Nick Waterworth admitted early this year that their 2009 goal had been ‘survival’. Long term shareholders are unlikely to see any sunshine soon as the Ambition shares remain friendless.

Rubicor:  Current  CEO, Jane Beaumont took over from founding CEO, Wayman Chapman in early 2009 and found herself faced with the toughest recruitment job in the country.

As a highly leveraged company, Rubicor was absolutely hammered from all sides during the GFC and their shares were dumped.

Huge debt and huge goodwill write-offs ($32.4 million in 2009) have made returning to profitability a monumental   task for Beaumont. Better margins, reduced costs and the support of their major lender, ANZ, has seen Rubicor struggle off the canvas.

HJB:  Their revenue continues to shrink. They continue to make a loss. Staff turnover remains an issue and their share price is lower than Rubicor’s. CEO, Robin Jerome, must be one optimistic and resilient guy.
Share
Tweet
Share
0 Shares
Posted in Uncategorized and tagged profit, public companies, results
0 0 votes
Article Rating
Subscribe
Login