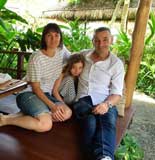 I was greatly saddened to hear of Marc Garside’s passing this week.Although originally from the UK, the majority of Marc’s recruitment career was spent in Australia. Marc had leadership roles at Robert Walters, Recruitment Solutions and Chandler Macleod. He also established his own recruitment agency in the early 2000s and, more recently, established an online visa consultancy business.

In 2009 Marc was diagnosed with advanced oesophageal cancer and after treatment it was believed he had a good chance of beating the disease long term.

Earlier this year Marc and his family received the shocking news that not only had the cancer returned, it had spread to his pancreas and chest. The two tumours were unable to be removed and palliative chemotherapy was undertaken in an attempt to prevent further spread.

It was hoped that Marc may have had four or five more years more to live. A big fundraiser was held at the end of April to assist in the massive financial investment needed to have Marc treated with advanced new cancer treatments in Germany. Sadly Marc’s health rapidly declined and, as a result, he was unable to undertake all of the treatment.

Marc passed away last Tuesday, 20 September 2016 in the loving company of is wife of ten years, Skye and his 8 year old daughter, Willow.

A remembrance service was held at Tamarama Beach earlier this week.

I only knew Marc briefly but he struck me as a passionate, optimistic and committed person who would be excellent company.

RIP Marc Garside; the Australian recruitment community remembers you and recognises your skill, character and commitment. We grieve with your wife and daughter and we want them to know that your fine contribution to our industry lives on through the impact you had on your employers, colleagues and employees.