As I considered the impact of the 2017 RCSA International Conference: The Power of Community I started to write about the impact that the conference had on me. Then I read Aspect Personnel’s Founder and Managing Director, Matthew Sampson’s blog on the same topic.

Matt perfectly captured what I, and I suspect many other delegates, experienced : The sense of community with my fellow delegates, the Conference exhibitors and sponsors and, most importantly (for me), the Fijian people (especially school children).

This sense of community does not happen by accident.

It does not happen because some marketing person or event organiser coins a conference theme highlighting community and this automatically creates a sense of community.  A sense of community happens because a leader creates it. In the case of the RCSA, we have two leaders to thank for this; our retiring (after four years) National President of the RCSA, Robert van Stokrom and our Association CEO (of 16 months) Charles Cameron.

Robert has been tireless in his commitment to fulfilling the aims of the RCSA over his four years as National President. He has presided over one of the most significant transitions that an association can have, namely the installing of a new CEO and the inevitable changes that come from having a new association leader. 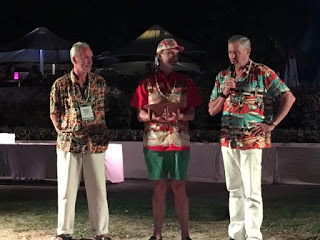 From where I view things, and from talking to other industry players (both RCSA members and non-members), it’s clear that Robert has nailed this critical part of his role.

Although it is still relatively early days, it is clear that Charles Cameron has been an outstanding appointment for our industry. Charles has led from the front. He has done the most important thing for our industry – he has been out there in each state, and across the Tasman to New Zealand, multiple times in order to meet and engage with RCSA members and non-members. Just as importantly, Charles has met and engaged with industry vendors and governments of both sides.

The building sense of community in our industry is creating momentum to fulfil on RCSA 2020 Leadership specifically the Mission; Through our leadership in the world of work, and empowerment of members, we will improve lives, communities and the economy.

At the Conference dinner, National Board member Steve Heather provided a wonderfully appropriate tribute to Robert (see photo). I was very glad to be there to witness it. Thank you Steve for doing Robert’s service some form of justice.

The Power of Community in the recruitment industry – it’s real, alive and growing. Thank you Robert and thank you Charles for your respective leadership in making this happen.

Everybody get on board – we have a very exciting future ahead of us!

Note: You can view a six minute video capturing the mood of the 2017 International Conference here.

One year on: Interview with RCSA CEO, Charles Cameron

Why a strong industry body creates a powerful industry

I'm glad to hear I am not on my own with regards to the impact the experience had on me.

Love (and agree with) your comment that community does not happen by accident, nor can it be contrived by a clever marketing team – not an authentic one anyway.

A job well done, and an event to be very proud of.