This week we have seen the full local impact of last month’s Harvey Weinstein expose. The combined Fairfax Media/ABC investigative resources were marshalled in service of Tracey Spicer’s tweet of 18 October: 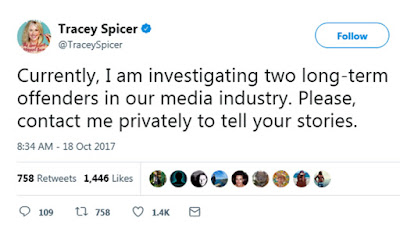 As you can see, the tweet generated an immediate and overwhelming response that quickly elevated Don Burke’s name to the top of her list of men to investigate.

The subsequent reporting by The Age, The Sydney Morning Herald and the ABC’s 7.30 program, revealed a consistent pattern to the behaviour being alleged of Burke; he used utterly crude, gross and completely inappropriate sexual language and aggressive sexual behaviour, including sexual assault, to shock, belittle, bully and demean a countless number of women across a spectrum covering employees of Burke’s production company, an Olympic gold medallist, school girls and potential employees.

This is just the result of the first 24 hours of publicity. I note lead Fairfax Media investigative journalist, Kate McClymont, who broke the story on Monday, commented the following day that she had received new messages from over 200 women with their own Don Burke horror story to tell.

Although it is gratifying that Burke looks like, finally, being brought to account for his past behaviour, it has occurred in a week that the recruitment industry has much to be proud of in terms of its own step forward in gender equality.

On Friday afternoon, Sinead Hourigan was voted in as the new RCSA (Australia & New Zealand) National President, succeeding the retiring Robert van Stokrom, after his ten years on the National Board including the most recent four years as President.

Sinead is the first female to attain the position of National President, in the 20 years history of the RCSA. although we have long had women in other significant positions in the RCSA, for example former RCSA (and current APSCo) CEO, Julie Mills. My own time on the NSW Council of the NAPC (forerunner to the RCSA) was served with Kaye Strain and then Ruth Levinsohn, respectively, as NSW NAPC President.

Our industry’s ‘grandfather’, V. John Plummer (senior) was renowned as promoter of women’s capabilities and he laughed all the way to the bank for his fierce non-discrimination. When he sold his agency, Centacom Staffing in 1988 to (what was then) Adia (later Adecco) his company employed 298 women and just two men!

To talk to any woman who was in Mr Plummer’s employment for any length of time you immediately hear a deep respect for him because he had deep respect for them and he rewarded them financially in a way that was unheard of in other industries 30 to 40 years ago.

To contrast the recruitment industry with the endless tales of horror coming from the entertainment industry, I took the time this week to contact some relevant people for their personal experiences of Mr Plummer.

John Plummer (Junior), very kindly provided me with some background on his father’s company and attitude, via an email, that I am sure will be fascinating to everybody in our industry interested in its local heritage.

Centacom was born in the post war era. Many women who had been working through the war in male roles were required to return to pre-war duties. It was also an era of population movement. The word Centacom is a derivative of the Central Accommodation Bureau that was located near Central Station in Sydney. It provided accommodation and jobs. You must also keep in mind that the female role in the work force was changing. It wasn’t until 1966 that a married woman was allowed to work in Government (single women were terminated immediately on advising of marriage). The vast majority of these were in clerical, admin/secretarial functions.

At that stage Centacom was purely an employment agency and had great success finding roles for these displaced government employees. It is no secret that women are more comfortable dealing with other women and hence the focus of Centacom was female consultants placing office staff. So really the business was born out of environmental opportunity. Temperamentally women are multitasking nurturers, while men are single task hunters. It was more obvious in the 60s and 70s that office work was a female domain.

Very few men wanted to do recruitment work then and so there were no issues about equal pay for women as females were doing all the work (has this really changed?). In general industry there was a glass ceiling for women in management roles. So the philosophy at Centacom was to provide opportunities for women in both management and pay, effectively saying “no glass ceiling in this company”. Centacom had its millionaires club which had two concepts behind it. You joined the club when you hit a million dollars in billings and secondly it was to create as many millionaires in the staff as possible. Needless to say this was warmly accepted and won great loyalty. That loyalty was core to a very strong culture.

Perhaps my final comment which is often repeated; VJP had a plaque on his desk that read “The best man for the job is a woman”.

My comment on Don Burke; Dinosaur – should be extinct

The women will say it better than me.

I did make contact with a few of those Centacom women that John alludes to, each of whom experienced the respect and generosity of Mr Plummer first-hand.

Here’s what they had to say:

Pioneer, visionary and champion of women in the corporate world are terms that come to mind when I think of Mr V John Plummer.

Commencing my recruitment career in the 1980’s when Mr Plummer was at the helm of what was then an innovative concept in Australia, a recruitment agency, I saw first-hand how he invested in the women he employed. Promoting women on the basis of merit, we were given opportunities to be managers. We were given a voice in the business world.  We were given the opportunity to earn financial independence.

As an employee of Mr Plummer, I felt respected, listened to and above all else, valued.  He was, and is, a gentleman.

I’m sure you have heard from other people that one of JP’s favourite expressions is “the best man for the job is a woman!”  My experience was that he treated you as a person and a professional & empowered you to run your Centacom branch as if it were your own business but with the support and encouragement of the head office team.

He was generous, not only in a financial sense but with his time & knowledge too.  He was there for you during the tough times as well as the good ones and I know that he quietly helped many people through difficult times without it becoming common knowledge & with minimal fuss.

He gave people who worked for him an incredibly solid platform for success and I remain forever grateful to him for everything he did for me.

I cannot speak highly enough of Mr Plummer, and I started working for him 45 years ago. He had a saying ‘The best person to do a man’s job is a woman!’ and another one was ‘If it is to be it is up to me’ and all the staff adhered to that.

He respected his staff, never raised his voice, he shared in the profits of his company with everyone and always wanted to see his ‘girls’ become successful. For me his help continued even after he retired, and he became a mentor for me.  The reason I have stayed in business for so long is in testament to Mr Plummer.

In light of what we hear about supposed ‘successful’ men and their treatment of women Mr Plummer is certainly the exception to the rule.

Mr Plummer was an inspiration to all his team – constantly providing motivational and goal setting literature along with self development literature.  He took this to a greater level by providing on-going training through numerous conferences and training days throughout every year.

He rewarded good results with attendance at International Conferences for his top performers.  All expenses paid, and still paid their salary and not taken from their holidays!

You can imagine that among such an ongoing bevy of women, that Mr Plummer was constantly in the same situation that these poorly behaved men have found themselves but he treated all his employees with the utmost respect being a chivalrous, old school gentleman. His language was and is always polite, educated, courteous, direct and positive.

Mr Plummer was keenly interested in all his staff – their personal situations as well as their business performance – and many times he assisted his employees through difficult times with counselling, financial aid, listening and caring.  He HELPED them get through their difficult times and never held anything against them – just helped them again if need be!

He was always there for us!  More like a caring Father or Uncle who understood his employees and we knew we could turn to him if we needed help.  I personally know MANY women who have gone to him for assistance or guidance and he helped them.

He has never asked anything from us. But he has ALWAYS been there for us!

A true gentleman who changed the lives of hundreds of women directly and hundreds of thousands of people indirectly throughout the last 50 years.

Thank you, Mr Plummer, for showing our industry the way and may your outstanding example of fairness, respect and equality in the workplace receive the wider recognition it so richly deserves.

Weinstein behaviour is all-too common: Men have to change now

Mothers, families, work and role sharing: what I have learned