Just before Christmas 2016 the Clarius/Ignite board decided that one of their own, Julian Sallabank, was to be the company’s new CEO, replacing the departed Peter Wilson.

At the time of the Sallabank appointment I outlined why I thought the Clarius/Ignite board were likely to be making a mistake (again) in appointing a CEO with his type of background.

Having read my blog Sallabank called and invited me to have lunch with him. I accepted to found him to be a polite, respectful, friendly and intelligent. However after spending 90 minutes with him I was even more sceptical that he was the right person for the job.

The main reason for my scepticism was that Sallabank failed to ask me what ‘good’ looked like inside a recruitment agency.

I haven’t owned or run a recruitment agency but I’ve been in general management or team leadership roles with three of the four recruitment agencies I have worked for (each of them very successful in their own way). I have also been a coach, mentor or advisor to around 40 different recruitment agency owners over the past 15 years of self-employment.

Yet Sallabank, who had never spent a single day as a recruiter or leader of recruiters, failed to ask me a single question about the level of results, activities, skills or behaviour that he should be looking for inside Clarius/Ignite to act as a template for the rest of the organisation.

Contrast this with the conversations I have with, already highly successful, recruitment agency owners such as Daniel Mundy, Stuart Freeman and Rob Davidson. Each of these owners, and others like them, have accomplished far more than me in the sphere of recruitment agency success yet they are always interested in asking me what ‘excellent’ looks like in other agencies and how this level of performance has been achieved.

Sallabank is currently working out his notice at Clarius/Ignite having resigned in January after presiding over two years of declining sales and substantial losses. These results were against the backdrop of a booming market in which nine out of ten recruitment agencies recorded sales growth, reinforced by industry benchmarking guru, Nigel Harse declaring “I’ve never seen it this good”.

The half day I spent last week at Greg Savage’s Billing. Managing. Leading masterclass further reinforced the importance of the leader knowing what good looks like and consistently communicating these standards. 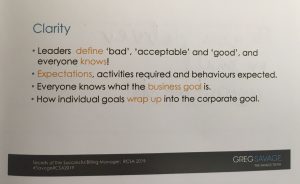 At a micro level this clarity ensures that each employee has an unambiguous understanding of what a good day, a good week and a good month looks like.

Greg’s slide is backed up by what Dr Jason Fox shared with the 2017 RCSA Conference audience; employee engagement, job satisfaction and performance is driven by explicit leadership acknowledgement of the employee making progress in their work and the employee’s inner sense of the importance of that progress.

Based on my sole meeting with Julian Sallabank I suspect he would have been effective at acknowledging good work but I doubt he had the necessary clarity about what ‘good’ looked like for a recruiter, a recruitment team and a recruitment division, compared to industry standards. One of the products of his first six months as CEO, the David Brent-like company Mission and 2020 Vision, served as an early warning sign that Sallabank had no clarity as to the specifics of what was required (ie that ‘good’ looked like) in order to return Ignite to growth.

If he did have that clarity then he lacked the capability to motivate or develop people to reach and exceed these standards.

Here’s a simple what-does-good-look-like test you might want to run with the recruiters in your team or company; at the end of the day ask them whether they have had a good day and whatever answer they provide ask ‘On what basis?’ In other words you want to hear the supporting evidence.

Listen very carefully to their answer. Ask them to be specific.

Are they referencing the objective data you know to be aligned with good? If not, why not?

If they’re not, I suspect you are some way short of a high performance culture; a culture in which every employee knows what ‘good’, ‘acceptable’ and ‘bad’ looks like; a simple concept in theory, but so-often missing in reality.