SEEK is a massive player in the local recruitment industry. Their dominance of the job board market in Australia is such that local job boards such as CareerOne/Monster, MyCareer and JobsJobsJobs are no longer competitors of any relevance.

SEEK are now facing a different, and altogether more powerful, threat from global companies; Indeed (owned by Japanese-owned Recruit, the 4th largest recruitment company in the world), LinkedIn (owned by Microsoft, the world’s largest company, by market capitalisation) and Google.

In 2017 I wrote a number of blogs outlining and dissecting SEEK’s behavior as it impacted the local recruitment industry, specifically highlighting two of its fully and partly-owned subsidiaries, Onploy and Sidekicker.

Last year I published an interview with a very frustrated recruitment agency owner, Frontline Recruitment Group’s Peter Davis, who outlined his specific grievances with SEEK and his frustration with the unwillingness of SEEK to address his concerns in any meaningful way.

Over the coming weeks I will be returning to the topic of SEEK’s current activities and its plans for the future as they potentially affect the local recruitment industry.

Today I start with a look at SEEK’s intentions with respect to its local job board advertising products.

On 30 April, SEEK Limited presented a trading update at the Macquarie Bank Conference.

For those unfamiliar with a ‘trading update’ it’s typically a presentation made by a public company CEO about the company’s current strategy and performance to a room of people (predominantly stock analysts, fund managers and finance journalists) who influence the prices of public company shares through their decisions (or recommendations) to buy, sell or hold such shares or the way in which the company is reported.

The outcome sought by the company in question is to increase demand for its shares, hence leading to a rise in the company’s share price.

SEEK Limited’s share price hit an all-time high of $22.94 last September before tumbling to $16.27 in the first week of January 2019. Subsequently SEEK’s shares have regained half of their value, relative to their Sept 2018 high, to sit right on $20 at the time of writing.

The slow return to former highs appear to be driven by the market’s concern that losses in SEEK’s Early Stage Ventures (ESVs) were more than 10 per cent greater ($45 million) than previous guidance ($40 million) combined with the guidance that Net Profit after Tax (NPAT) for the current financial year will be below the 2018 NPAT.

What did SEEK present at the Macquarie conference that is relevant to the local recruitment industry?

On page 11 of the SEEK presentation we find: 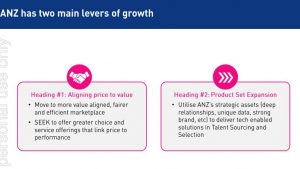 I will write about Product Set Expansion in an upcoming blog. This blog is a brief look into SEEK’s pursuit of “Aligning price to value”.

Aligning price to value means being able to charge the advertiser a price (higher) for a:

(i) candidate-scarce role compared to a job ad for a candidate-plentiful role,

(iii) a permanent role compared to a temporary role.

SEEK note in their presentation that being able to charge a higher price for a higher-value product had not been possible until recently due to:

(b) lack of technical capability to do so

SEEK’s Premium Ad is the entry point for SEEK into the ‘dynamic pricing model’ product.

SEEK summarises the current drivers of Premium Ad performance as:

SEEK are bullish about the prospects for the Premium Ad product, specifically noting that in the first half of the current financial year Premium Ads delivered $20 million in revenue (72% growth vs pcp) even though they accounted for only circa 3% of paid ad volume.

Drivers of future growth in the Premium Ad product are listed as:

The potential financial upside was articulated as approximately $80 million annual revenue based on 6% of ad volume being Premium Ads rising to 200 million p.a based on 15% of ad volume (assuming no cannibalisation).

SEEK’s intention for premium/performance-based ads is unambiguous: “This solution has been popular with hirers and (we) expect similar solutions to be rolled out more broadly across SEEK’s platform”

SEEK provides no specific guidance with respect to the range of increased prices that might be attainable under a performance-based ad model. However they do provide a global comparison that drops a pretty big clue. 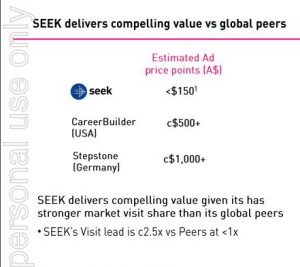 SEEK’s intention with respect to pricing only reinforces the sentiment I expressed 18 months ago with respect to the over-reliance that a majority of recruitment agencies have on SEEK ad response as a sourcing channel:

When you rely on a dominant (near-monopoly) supplier for an important component of your service offering, without a well-resourced plan to reduce your future reliance on this supplier, you are backing yourself into a corner with few palatable escape options if your supplier ‘goes rogue’.

The long game: is it Seek v Google (with agencies collateral damage)?

Sidekicker: Seek like more than one kind of cake

Thanks Ross for sharing your valuable research.
You are spot on when you say that recruitment agencies can’t be over reliant on ad response from Seek. Consultants need to be providing extra value to their clients in any case.
My belief is that clients can be running their own Seek ads and good Consultants have a network in their specialisation they can tap into to find candidates that may not necessarily be on the market – that is where you are adding value.
If you are a recruitment consultant relying on Seek for your Candidates, you need to start sharpening up your headhunting skills.
Ross, it looks like you are covering those headhunting skills in your Advanced Recruiter Program?
Thanks again for your valuable research and your ongoing support of the industry.

Perhaps an Australian agency, agency consortium or the RCSA could launch a model similar to what Reed Recruitment did in the UK. Reed is a national agency who started freecruitment, opening up their website (job board) to any agency (but only agencies) who wanted to advertise on it. Legend has it that it was an employees suggestion.

It has been running for the 15+ years I have been in Oz so it must be working for them – there will be safeguards protecting candidate ownership – the rationale, as I understand it, is if the Reed site has more jobs on it then candidates are more likely to visit the site and see Reed jobs, as well as jobs by other agencies.

One way to end Seeks dominance is to stop advertising on it – Jobseekers will go to where the jobs are.

I am an ex Hays boy, Reed and Hays were like Man Utd and Man City so I am not a fan of Reed but I did like this idea.

Both did not gain any traction.

Absolutely – be a great idea. All agencies leave SEEK in an orchestrated manoeuvre. I am in!

If Seek didn’t work then no one would use it. I’m willing to bet a pond to the penny that the majority of recruitment consultancies & direct hiring companies in Australia fill their roles via candidates sourced through Seek. By quite a large margin as well.

I run a boutique agency (7 consultants) and we’re finding SEEK has become less and less effective over time.

With 11 months of this FY now completed, we’re running at 12% of our YTD placements coming from a SEEK.

Yet SEEK ad costs are now almost 60% of our marketing budget.

We’ve decided (by the narrowest of margins on a cost-benefit analysis) still worth it for us rigt now as we aim to build our brand and increase our presence across a few new verticals, but I’m sure I’m not the only agency owner who has been actively investing in other channels (events, social, AdWords, sponsored LI posts) to enable us to one day leave those pricks at SEEK in our dust.

I have always worked internally and not in agency recruitment, however I meet with recruitment agencies regularly as they do a lot of work for the company I work for. Without fail every agency I meet with tells me that they dont advertise on Seek, they only use their networks, head hunting etc etc. So what Seek charges shouldnt be an issue for agencies at all, more so for us in internal roles, as our costs will go up.

So what is the issue with what Seek charges? Agencies dont use Seek?