RecruitLoop launched in early 2011 promising a “stress-free recruitment process” while “slashing the cost of traditional recruitment support by up to 80%”.

As any recruiter knows there’s no such thing as low-cost stress-free recruitment so it wasn’t any surprise that none of the three RecruitLoop founders; Garry Visontay, Denis Zubkov and Michael Overell, were recruiters. Having realised they needed recruitment expertise, former Aquent Director, Paul Slezak, joined in October 2011 and was acknowledged as a co-founder. 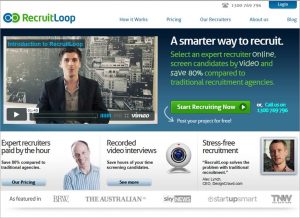 RecruitLoop offered employers an unbundled outsourced recruitment service, at an hourly rate, via an online platform. RecruitLoop generated the clients who engaged a recruiter of their choosing after having invited recruiters to submit a bid to undertake the assignment.

The assignment could be just one part of the recruitment processs, such as posting a job advertisement and screening responses or it could be the full end-to-end process, or anything in-between.

The RecruitLoop recruiters were operating as independent contractors, working from home and utilising the RecruitLoop platform including video interviewing.

Early success encouraged the founders to expand their horizons. In January 2013 the directors decided to relocate the company to San Francisco, with the key executives moving across the Pacific within weeks.

Four months later a successful $500,000 seed funding round from private investors in Australia, Singapore, the UAE, and Europe, was announced.

Overell and his team were clearly putting that a lot of hard work in the US and things seemed to be progressing well.

In 2015 RecruitLoop reached a critical milestone, monthly breakeven, and an offer was made for the company. The multi-million sale that most entrepreneurs aspire to was on the table. All the directors, except one, wanted to take the money. The sale did not proceed.

In 2017 the company grew sales and traded profitably across the full year, a massive milestone in the life of a start-up.

However, founder and CEO, Michael Overell was losing his appetite for the role and, in April 2018, with the support of his co-founders, he announced his departure. The following month Overell commenced employment at ride-sharing company, Lyft. Overell’s Linkedin profile lists his current role at Lyft as Lead, Central Product Management.

No matter the reasons it’s always a unhelpful look, and red flag for investors, when a co-founder, CEO and the public face of a barely-profitable start-up declares he’s “ready and excited for new challenges” as he leaves his executive role, even if he remains as a board member.

As the company’s momentum stalled the investment in online ads, critical to drive the sales funnel, declined. As fewer assignments were posted, fewer recruiters generated an acceptable income. RecruitLoop’s income, generated as a percentage of recruiter-to-client invoices, dropped away, at a time it needed to be accelerating in the opposite direction.

By mid-2019, having had over 7,500 recruiters registered on the RecruitLoop platform, there were less than 30 active recruiters left. Even on rates ranging from $50 to $200 per hour (minus Recruit Loop’s clip of the ticket), it was very hard for the RecruitLoop recruiters to earn anything like an average recruiter’s salary purely on RecruitLoop assignments.

An unpredictable income stream led to RecruitLoop recruiters taking other job options and disengaging from the platform.

As to the specific causes of RecruitLoop’s ultimate failure I have no idea however as to the general cause of the company’s failure I simply offer you this quote from my blog of just over two years ago; Recruitment Tech stocks fall: Are they all sizzle and no steak?

If you’ve invented something new but you haven’t invented an effective way to sell it, you have a bad business – no matter how good the product.  Superior sales and distribution by itself can create a monopoly, even with no product differentiation. The converse is not true.

No matter how strong your product – even if it easily fits into established habits and anybody who tries it likes it immediately – you must still support it with a strong distribution plan.

Zero to One: Notes on StartUps, or How to Build the Future by Peter Thiel with Blake Masters (Crown Business, 2014), page 130

Theil goes on to articulate what he calls the “distribution doldrums” which is the phrase he uses for the “hidden bottleneck” of distribution that afflicts many mid-priced products or services.

In essence, Thiel asserts that the product’s margin isn’t large enough or the potential volume isn’t high enough (at least initially) to employ a substantial personal sales force nor is the product, or its accompanying marketing campaign, sufficiently compelling to generate viral sales.

As Thiel concludes “Most businesses get zero distribution channels to work: poor sales rather than a bad product is the most common cause of failure”.

RecruitLoop didn’t have a poor product or incompetent people; they simply couldn’t get their business model to work at a scale large enough to make a sustainable profit.

Recruitment Tech stocks fall: Are they all sizzle and no steak?

A.I. will change agency recruitment but in an unexpected way

Another moronic ‘the recruitment industry is dead’ article

Ross. Your prescient insight into the possible causes of this marketing failure ring true. Clearly, the founders of RecruitLoop did not have a strategy for growth, going beyond their offering of a turnkey service on a case by case basis towards some system that would enhance operational efficiency and service delivery for their clients, allowing for scaling up of their enterprise. Zero to One contains examples of this process, essentially requiring a progression from “simple sales” to ” complex sales”.