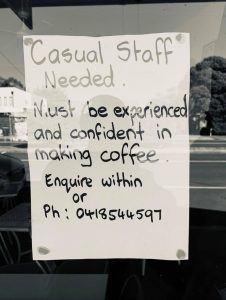 Recruiters quickly understand the realities of a changing labour market because we are immersed in that market each day.

Unfortunately, it’s much easier to blame the recruiters (internal and external) for not being able to source the right candidates rather than confront the change and adapt their recruitment practises.

You can bet that many hiring managers base their opinion about the labour market on the headline unemployment rate (currently 6.6% in Australia) and act accordingly.

As any recruiter will attest the national unemployment rate is a completely irrelevant indicator in understanding the demand and supply of talent in their market.

One of the things I failed to mention last week in my list of things recruitment agencies could do to prepare themselves for this shortage was one of the most important ones: educating clients and prospects about the current labour market reality.

The role of education has always been an important one for recruiters to undertake in building credibility with employers; however, it now needs to go to a new level.

Here are six suggestions you should become practised at discussing with your clients and prospects:

Telstra has done just this for neurodiverse candidates (such as those with autism). Short-listed applicants will not be required to participate in an interview. Instead, they will each go through screening workshops, skills assessments, learning modules, personal activities, and scenarios. Eight current vacancies for network engineers, senior technicians, and in business support have been specifically adapted for neurodiverse candidates.

A simple example is candidates without (or with little) Australian work experience, yet who possess the core requirements of the job. I have previously written about, in detail, my own success in placing such candidates when I was an agency recruiter in Sydney. For an in-depth piece on undervalued talent then I highly recommend Erik Bernhardsson’s How to hire smarter than the market: a toy model

As one of the world’s most influential thinkers on recruitment, Kevin Wheeler, states in his excellent article 7 Ways We Created the Talent Shortage: Many professions require degrees and, in some cases, an additional certification that historically required only an apprenticeship or the passing of an exam.  The evidence that these credentials are necessary is sketchy.  Many jobs can be taught on-the-job, learned through apprenticeship, or by serving as an assistant to someone with deeper knowledge. In many areas, job content has not significantly changed or can be learned without formal academic training.

The reality of this approach has been recognised by many employers in the US such as Google, Apple, IBM, Intel, Hilton, Starbucks, Publix, Penguin Random House, Costco Wholesale, Whole Foods, Nordstrom, Home Depot, Bank of America, Chipotle and Lowe’s, who have all posted numerous IT roles that do not require a formal degree. In fact, Google has jumped on the commercial opportunity of this trend and has launched two Career Certificate courses for entry-level positions: Google IT Supportand Google IT Automation with Python. The IT Support course costs $49 a month on Courser and about 85% of the 637,047 enrolled students have left raving 5-star reviews.

This season Queensland growers have been forced to offer higher wages and better conditions to attract a local workforce (and it seems to be, largely, working). I think many (not all) employers might be surprised, shocked even, with the deeper pool of candidates that an increased salary or wage on offer will produce.

A June 2020 University of Chicago white paper concluded that 37 per cent of US jobs can plausibly be performed at home. This figure greatly exceeds the share of jobs that have been performed entirely at home in recent years. I expect an Australian study would produce an even higher percentage given that agricultural employment accounts for 10.9% of the total workforce in the US, compared to 2.2% of the total Australian workforce employed in agriculture.

Clearly, it’s cheaper to upskill and retain existing employees than it is to hire skills (for which employers will always have to pay a premium, whether as employees or contractors) and make staff whose skills are no longer relevant, redundant.

Don’t blame your clients if they are stuck in their old candidate-supply paradigm; make it your goal to educate them about what they could do differently.

Thanks Ross, a timely article and a good follow up from last week. Also a great reminder about educating and challenging Clients and their ways of thinking.

A great article Ross and something that I’ve been banging on about for this past 6 months. The recruitment landscape is only going to get worse and we need to be having these conversations now.