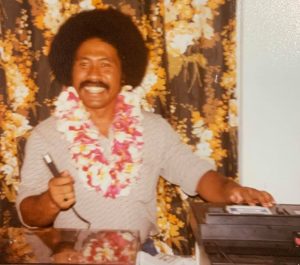 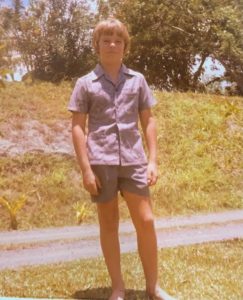 On the evening of 30 November 1976 my ten-year-old self, my three younger sisters, and my parents disembarked at Nadi International Airport, after a ten-hour journey from Hobart, via Sydney.

My father, having been granted leave without pay from his auditing job at the ATO, had accepted a two-year contract with the Fiji Inland Revenue Department, based in Fiji’s capital, Suva.

Having left grade 5 in suburban Hobart where all my classmates looked and sounded alike it was quite an adjustment to start the 1977 school year in a multi-racial class at Veiuto Primary School, where, as a European (as white expats were called, regardless of their nationality), I was in the minority.

My teacher, Mr Kwong (pictured, above), was a charismatic Chinese-Fijian in his thirties who played the guitar and clearly regarded himself as a bit of a man-about-town. He was generally popular with the students but didn’t suffer fools. On one occasion, greatly displeased with some tomfoolery while he was giving a lesson, Mr Kwong made the two transgressors stand at the front of the classroom and head-butt each other until the crack of heads could be heard in the back row.

In 1977 I progressed to first-year high school (then called Form 1) at Suva Grammar School. It was Fiji’s largest and most prestigious secondary school.

My three closest friends in that class were an Indian-Fijian, an ethnic Fijian, and a Sri Lankan expat who all enjoyed playing various sport as much as I did.

I don’t recall any incidents of racism or even thinking in racial terms. I was just a kid at school with other kids.

We returned to Hobart on New Year’s Day 1979. The racial make-up of my high school was largely the same as my former primary school a couple of kilometres down the road, yet I was different.

The experience of living in a multi-cultural community in a developing country had changed me forever. Even now I regard the 11th and 12th years of my life that I spent in Fiji as the most formative years of my 55 years on this planet.

I hadn’t been able to identify or articulate what specific impact those two years had had on my career until I read about some recent MIT Sloan research led by assistant professor Jackson Lu.

In their paper, published two months ago in Organization Science, Lu and co-authors Roderick Swaab and Adam Galinsky, explain that living and working in different countries exposes a person to different customs, norms, values, and communication styles. The person must learn to navigate the nuances of each culture, as well as listen to and connect with the people living there.

Those experiences result in a skill set that makes someone “more likely to adapt and frame their communication in a language that a contact can understand,” the researchers write. “They may also display more respect, patience, and sensitivity to others’ feelings and needs, and employ situationally appropriate words, vocal tones, body gestures, and facial expressions.”

As a rookie recruiter starting his career in London, straight out of laid-back 1980s Hobart campus life, I quickly needed to apply my communication skills to interviewing a very ethnically broad range of candidates.

After two years I returned to Australia and found my niche in temp accounting recruitment in Sydney. Again, I was interviewing candidates from a very wide range of nationalities and ethnic backgrounds.

Although, at that stage, I was not in a formal leadership role I saw myself as a leader of the temps who worked for me. I worked hard to communicate effectively with each of them to win and keep their trust.

After five years back in Australia, I reached the top echelon of fee earners in my company; built on the foundation of loyal temps who I repeatedly placed into new assignments.

The effectiveness of my verbal communication was undoubtedly a key factor at the heart of my success as a recruiter.

The MIT Sloan research also lends weight to my instinct that a hidden cost of the pandemic-necessitated global lockdowns will be the lack of opportunities for people of all ages, especially those under 40, to live, work and study in other countries.

There will be tens of thousands of Australians in their twenties who will never have the overseas travel and work backpacking experience that I, and many others of my vintage, benefited from in the formative years of early adulthood.

The opportunity to have these priceless experiences won’t disappear however the opportunities will surely be fewer and the reluctance of people to travel, understandably fearful of being stranded overseas, will be substantially greater.

My whole career, and whatever successes I have had along the way as a recruiter, leader, trainer and coach has been built on the communication competence that was seeded in the multi-cultural classrooms and playgrounds on Suva that I revelled in across 1977 and 1978.

How Mitre 10, campus life and London made the recruiter in me

Great piece Ross. I only just this week interviewed a candidate who has been fortunate to work in three different countries and we spoke about just how enormously valuable these experiences have been. Not just in terms of his communication and interpersonal skills but his ability to be empathetic and relatable was really evident.

Have you by chance seen the ABC program ‘The school that tried to end racism”.?

I haven’t, Tracey, but I noticed it on iview this morning so I will definitely be watching it.