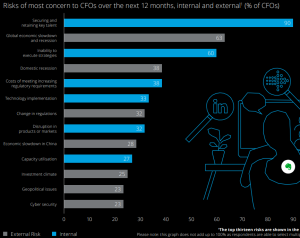 It’s amazing (or maybe not) how quickly C-suite sentiment about the importance of their workers turns when market conditions change.

Comprehensively, with daylight second, the most nominated response to the category ‘Risks of most concern to CFOs over the next 12 months’  (graph above) was ‘Securing and retaining key talent, internal and external’, nominated by 90% of CFOs surveyed (the caveat being the survey’s sample size was not made public).

A long drop to equal fourth was ‘Domestic recession’ and ‘Costs of meeting increasing regulatory requirements’ (both nominated by 38% of CFOs).

As the report’s commentary accurately summarises, “For some businesses the talent shortage has become business critical; for others it’s manifesting in higher costs and/or an inability to grow the business as quickly as hoped.”

How different it was just over five years ago when The Wall Street Journal reported’ “When asked to rank their businesses’ most valuable asset, leaders said technology matters above all, according to a new report from Korn Ferry. Employees didn’t make the top five.”

As I wrote at the time

The concluding line of the WSJ’s sobering article is:

“Looking ahead, leaders said the five most prized assets in five years will be customer-facing technology and products, innovation/R&D, product/service, brand and real estate, according to the report.”

Specifically the Korn Ferry research notes “67 per cent (of CEOs) believed that in the future technology would represent greater value than people to a business, while 44 per cent said that the growing use of robots, automation and artificial intelligence would make people “largely irrelevant” in the workplace of the future.”

Yep, people don’t get a look in.

Although the Korn Ferry research was surveying CEOs across the globe and the Deloitte research is a domestic survey of CFOs, it shows the clear differential in the mindset of yesterday’s CEO compared to today’s CFO.

Acknowledging the generalisation inherent in casting CEOs as more future, and opportunity, focused and CFOs as more operational, and risk-focused it’s an example of how easy it is to ignore or underestimate the importance of something until you no longer have easy access to it (I quickly appreciate the importance of oxygen to me when I am unexpectedly dumped by a wave and find myself tossed around in the surf as I struggle to get to the surface).

As I wrote in last week’s blog the harsh reality of underestimating the importance of effective recruitment and retention is costing businesses more than customers, it’s potentially costing them their shorter-term  business goals and, for some, their longer-term viability.

The CEOs’ belief, in 2016, that robots, automation, and artificial intelligence were poised to largely overtake the importance of workers within five years has proven to be, at best, misguided and, at worst, delusional and negligent.

Today’s CFOs are unusually united in how critical recruiting and retaining talent is to the ongoing health of their employer….and I very much doubt that’s going to change anytime soon; thankfully.

How to spot exceptional talent before everyone else