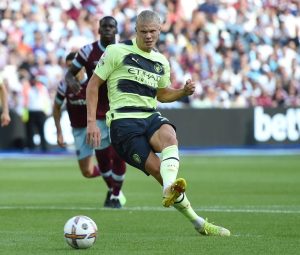 City’s two goals were both scored by Norwegian striker Erling Haaland (pictured, above), in his debut game for the club.

Haaland’s transfer from German club, Borussia Dortmund (who play in the German equivalent of the EPL – the Bundesliga), was achieved when City agreed to the transfer fee, rumoured to be around 70 million pounds.

Haaland, whose father also played for Manchester City, is now believed to be the highest paid player in the Premier League, on a salary of over £500,000 a week, equating to AUD 45 million per annum.

Although he stands 195 cm, is very quick, skillful, and won the Bundesliga player of the season in 2021, it’s still an extraordinary amount of money to pay a player whose 22nd birthday was only two weeks ago.

It’s hard to imagine that one footballer receives the equivalent of approximately AUD 1 million for each game he plays, regardless of his performance.

The reason Manchester City are paying Haaland £500,000 a week is because they believe he is worth the money. Nobody is forcing City to pay him that much; they choose to in a (relatively) free global market for footballers.

Manchester City believes Haaland can make a significant difference in service of City’s ambition to win major competitions, like the EPL and The Champions’ League, and procure the accompanying financial returns that are delivered via lucrative broadcasting contracts.

The global market for footballers is a very good example of a free labour market.

Although salaries paid to footballers may seem ridiculous to an indifferent non-footballing public in the context of what they do (i.e. play a game) the salaries are not at all ridiculous in a free market – demand and supply dictate salaries, regardless of the subjective merit of the job.

Unfortunately for many employers, the free labour market is not currently delivering welcome news.

I read with some amusement the comments of the owner of Platinum Accounting, Coco Hou, who recently, according to news.com.au, “cried foul over the controversial act of poaching staff from their jobs”

Apparently, Ms. Chou has lost 7 out of 15 staff to larger accounting firms due to “the promise of massive pay rises and lucrative career progression.”

Ms. Chou complained that “staff are being stalked on sites such as LinkedIn and approached through cold calls and messaging,” which she labelled “sneaky”.

News.com.au reported Hou’s proposition that large businesses pay 15% to 20% of the employee’s annual salary to a small company like hers to compensate for poaching their staff and bemoaned that the mantra of “if look after your staff, they will stay,” is no longer applicable in a “challenging and predatory market environment.”

It may surprise Ms. Chou to know that the Australian Competition and Consumer Commission (ACCC) has a very clear role in ensuring free and fair competition, including competition for workers.

Anti-poaching agreements, with respect to employees, are practises that are unambiguously anti-competitive.

In the United States this area comes under the jurisdiction of the Department of Justice (DOJ), which has never been backward in prosecuting companies for anti-poaching agreements.

The most famous case, in 2010, involved Adobe, Apple, Google, Intel, Intuit, and Pixar who had entered into broad non-solicitation agreements that the DOJ said hurt competition and employee salaries.

Five years later Apple, Google, Intel, and Adobe agreed to a $415 million settlement to terminate an anti-poaching civil lawsuit that was filed on the back of the DOJ case.

The DOJ has recently upped the stakes in this area with SHRM reporting last August:

The evidence that changing employers is a key factor in improving pay is unequivocal.

Single-touch payroll data from earlier this year showed that Australian workers who switched jobs were receiving a remuneration boost in the range of 8% to 10%, which was substantial increase from the median 5% rise that the Reserve Bank reported was an expected increase workers enjoyed when they moved employers in more normal economic conditions.

Validating this causal relationship was a report last week in the United States that, “The typical worker who changed jobs between April 2021 and March 2022 saw earnings jump by 9.7% from a year earlier, after accounting for inflation, according to the Pew Research Center.”

The figure cited by Pew represents the median, meaning half of all workers who switched jobs got a net pay increase of 9.7% or more. The other half of job switchers got a smaller net raise or saw their net earnings decline.

Workers who switched jobs reaped more of a financial benefit than those who stayed with their employer, Pew found. The median worker in the United States who remained at the same job from April 2021 to March 2022 saw their earnings fall by 1.7% after accounting for inflation, according to the study.

Considering the median 11.4% earnings differential between those workers who switched employers, and those workers who didn’t, it’s clear why anti-poaching and non-compete agreements are important components of a free and fair labour market.

A free and fair labour market is certainly working for Erling Haaland but it’s a different story altogether for SME employers who have largely been immune from the competitive labour market forces now blowing strongly against them.