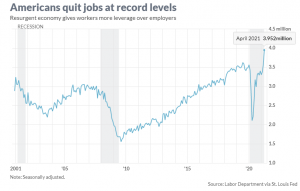 Last Tuesday the US Government reported that Americans were quitting their jobs in record numbers, with the data recording 3.952 million US workers leaving their employment in April, surpassing the previous record for this century of 3.591 million employee departures in July 2019.

Recent surveys of employee sentiment suggest that this spike in the data is unlikely to be an anomaly and serves as an early confirmation of a trend that is not confined to the US.

Robert Half’s survey (26 March to 15 April 2021) of 2,800 workers at US-based companies with 20 or more employees produced reported that 32% of employees plan to look for a new job in the next several months.

A survey in the UK and Ireland found that 38% of employees were planning to leave their jobs within the next twelve months.

This data was mirrored locally with Hays Australia reporting 38 per cent of Australian employees plan to look for a new job in the next 12 months.

A Microsoft report based on responses from over 30,000 workers in 31 countries found that 41% of the entire global workforce could be considering handing in their resignation including more than half of 18 to 25 year-olds.

A stated intention to quit is no guarantee that an employee will quit however the multi-survey evidence unequivocally points to the fact that employees are more amenable to an approach by a recruiter or more motivated to apply for another job, compared to any other time in recent history.

This is good news for recruiters; however, there is also a downside.

Candidates who are kind-of looking are much more likely to withdraw from a process, decline offers, and accept a counter-offer. Existing employers, aware of how tight the labour market is, are likely to throw everything at trying to retain a valuable employee who is not fully committed to leaving.

This is especially likely when you consider the main reasons consistently offered by survey respondents as to their motivation for seeking greener pastures.

“Top reasons for searching for a new job were getting a salary boost and greater opportunities for career advancement, cited by 29% each.” (Robert Half survey)

“…the (main) reasons cited by professionals for searching for a new job include a lack of promotional opportunities (43%) and uncompetitive salary (39%).” (Hays Australia survey)

Short-term solutions, such as raising pay or providing a promotion, are much more likely to work in a counter-offer situation compared to promising to address more intractable issues such as poor management style or workplace culture (mentioned by 37% of respondents to the Hays Australia survey).

There is no guaranteed way to avoid drop-outs, declines and counter-offers however there are some steps I recommend to minimise the frequency of recruiter (and client) frustration and disappointment.

In summary, my mentor said to treat all candidates as interested until you have accumulated enough evidence to classify them as committed.

I recommend you do the same through utilising the following six tactics, as appropriate to your market:

Each of those six tactics provides the candidate an opportunity to demonstrate their commitment to leaving their current employment, through their behaviour.

Be alert to the non-verbal clues offered by the candidate’s voice, gestures, and body language as to the level of real commitment behind what they say.

Be wary of the tendency to conflate a candidate’s suitability with their motivation to leave their job. They are completely different things and require completely approaches to ascertain.

Just because a candidate says they are going to quit it doesn’t mean they will quit. Don’t let the difference derail your reputation and motivation.

Answers to interview questions you should never accept: “I left because of a personality conflict with my boss”

Why candidates decline job offers (and what to do about it)

Increase your candidate supply by 30% with this tiny nudge

24 June 2021 (more evidence): “A quarter of workers still plan to look for a new job once the pandemic is over, according to a poll of 2,000 full-time US workers released by Prudential. Of those planning to leave, half say they are seeking better compensation and benefits and they would prefer a job that allows for professional growth.”