National business and economic activity data released in the past week confirm the ongoing strength of the 2021 economic recovery.

To save you the hassle of combing through the ABS’s national accounts data and the May update on the Labour Market Information Portal I have cherry-picked the most relevant data and graphs for recruiters and provided some brief commentary, below. 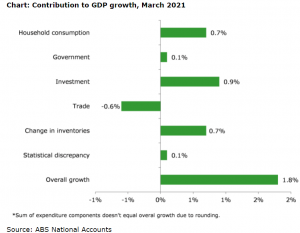 My comment: The most important trend is that the critical government support across 2020 (by way of spending) has now been replaced with surging consumer and business spending on the back of optimistic households and bullish businesses. This is a trend unlikely to slow down any time soon.

My comment: It’s extraordinary that over half of all employers were recruiting in May. The unstated problem for employers in this startling statistic is that (with the stagnant national supply of new workers) a high proportion of all jobs will be filled with an already-employed worker. This will create a domino recruitment effect as the newly-hired worker needs to be replaced by their current employer. With no change to immigration on the horizon, it looks like happy days for recruitment agency job flow for well into 2022, I suspect. 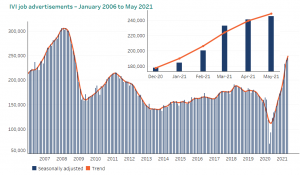 This represents the 13th consecutive month-on-month increase in job advertisements which now exceed pre-COVID-19 levels by 46% and have reached a level not recorded since October 2008.

My comment: Almost all employers post ads when they have a vacant job and with vacancies destined to remain high for many months to come it’s hard to see how job ads are going to decline any time soon.

Recruitment difficulty* (for May 2021)

My comment: As any homeowner will tell you even getting a return call from a tradie is a win. Getting them to commit, and then deliver on your requirement is another challenge altogether. Given the surge in construction and inventory levels labour hire and technical recruiters with reliable candidate flow will be in an enviable position across 2021 and 2022.

My comment: This expected increase in staffing is on top of any replacement recruitment activity. Again, the domino effect across the economy of the candidate supply squeeze will be felt across the whole economy for many months ahead.

*based on a monthly survey of 1200 employers nationally