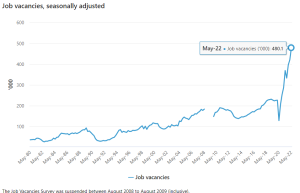 The release of the May 2022 vacancy data (above) provides gloomy reading for the nation’s employers but great news for the eight thousand recruitment agencies around the country.

The demographics point to the almost guaranteed certainty that the soaring vacancy rate won’t be dropping back to anything like historical norms any time soon.

The vacancy rate has more than doubled, compared to February 2020, immediately before the pandemic hit, when vacancies numbered 227,400.

Just over one-quarter of Australian employers reported at least one vacant job, a new record high, up from the previous record high in February 2022 (23.5% of employers).

Northern Territory employers were suffering the most with 31.6% reporting at least one vacancy. Employers in Western Australia (28.3%) and Victoria (27.3%), respectively, were the next two worse-off states.

Somewhat surprisingly, employers in Administrative and Support Services (38.3% reporting at least one vacancy), and Public administration and safety (37.9%) and Electricity, gas, water, and waste services (34.5%) were the employing industries experiencing the most (relative) vacancy pain.

The reasons causing employers in these sectors to experience more vacancy pain are most likely to be a combination of;

a) greater rigidity in their remuneration and benefits policies, and

Both of which have caused employers in these sectors to react too slowly to the white-hot recruitment market and consequently miss out on candidates who receive competing offers much faster.

The major reason for vacancies, nationally, was “resignations/replacements” (80.4% of all vacancies) which climbed for the third consecutive reporting period (3 months), topping eighty per cent for the first time.

Unfortunately, for employers, there is no cavalry coming over the hill as the most recent population data confirms. 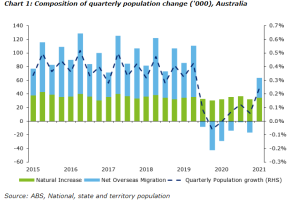 Although Australia’s net overseas migration* is now back in positive territory the huge hole in the labour market, caused by the dramatic drop in new entrants to the labour market from other countries over the past two years, will have an impact for years to come.

This labour market hole was a double whammy because Australia stopped the inflow of labour but the outflow was not similarly affected leading to Australia posting a net loss of overseas workers.

Over the past seven years net overseas migration averaged 216,000 people. Recent migrants have an average labour force participation rate of 72%.

Conservatively Australia now has a labour market hole – the ‘lost’ 310,000 workers that did not arrive in Australia in 2020 and 2021. This hole is having a huge impact on the Australian labour market.

This gap of 310,000 workers cannot be easily or quickly bridged as the only way that can be done is to increase migration.

Realistically, it’s impossible to triple migration numbers in one year.

Save just waving workers into the country without due process, Australia simply does not have the bureaucratic capability to process those numbers of people in a year, even if there was the political will to do so.

The bad news for employers, and the very good news for recruitment agencies is that, unless the economy suffers a dramatic recession, the boom in vacancies and placements will continue for the foreseeable future – the demographics all but guarantee it.

Historically Ross (the recession we had to have), the chain of events has been rising inflation leads to higher interest rates leads to a recession. Do you think the current lack of supply of candidates will mean demand for recruitment services remains high even if Australia experiences a recession?

Unless there is an unprecedented rise in the participation rate, Steve, we have at least three or four years of huge vacancy numbers. I doubt even a recession will put much of a dampener on the vacancy rate. Even in the highly unlikely event of the vacancy rate halving in the next 12 months, the vacancy rate would just be back to the level it was prior to COVID-19. All the evidence suggests that the demand for recruitment services is still climbing with no plateau in sight.