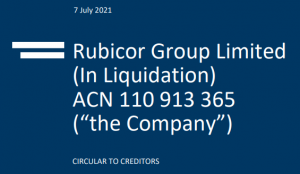 Tomorrow marks the twenty-fifth month anniversary of the collapse of the Rubicor Group.

I first wrote about Rubicor in March 2018 after the directors released the company’s underwhelming six-month performance update for July 2017 – December 2017.

In the 21 months since my most recent Rubicor blog, I have been regularly contacted by various former Rubicor employees who have shared their own frustrating attempts to get the money they are owed.

It now appears that the end is looming for the whole sorry and entirely preventable saga.

Over the past few months the administrators of Rubicor Group, FTI Consulting, have updated the creditors of the respective insolvent companies within the group.

The good news is that there was enough money collected by the administrators to make part payments of wages and superannuation owing to the consultants, temps, contractors, and other employees of the various subsidiaries.

The bad news is that none of the Rubicor subsidiaries received enough cash to enable the administrators to pay any leave or retrenchment entitlements to any staff nor to make any payments to unsecured creditors.

The tale of woe is summarised as follows:

A commercial recovery from a successful action against one or more of the directors for a trading-while-insolvent charge is the only way the Liquidators foresee any more money becoming available for additional creditor payments beyond those outlined in the most recent circulars.

With respect to potential charges against the directors for trading while insolvent the administrators reported as follows:

The Liquidators are continuing to investigate and quantify the loss suffered as a result of the Group trading while insolvent….the Liquidators intend to finalise all preference recovery actions in the Rubicor Group before considering options and costs to pursue insolvent trading claims against the relevant Directors within the Group.

Liquidators are also required to consider any offences that may have been committed by directors or any other person material to the operations of the company before it went into administration. With respect to this obligation the Liquidators reported as follows:

The Liquidators lodged a report (with the Australian Securities and Investment Commission) in accordance with Section 533 of the Act, on 1 May 2020 and we are providing ASIC with further information in relation to the reported offences.

It seems extraordinary that,18 months later, there is no update from ASIC on their investigation.

We can only hope that the directors responsible; David Hutchison, Angus Mason, and Sharad Loomba, face appropriate charges to provide some form of justice for the many employees who have received a pittance in settlement for the thousands of dollars in unpaid wages, superannuation, and other entitlements, let alone the many hundreds of unsecured creditors who have been left with nothing.

I’ll leave the last word to a former employee who contacted me recently:

FTI the liquidators acting for Rubicor liquidation advised that all staff who are considered priority creditors who didn’t get their super/unpaid salary should get approx 15c in the dollar but that the ATO would be making payments into our super fund once all resolved. Imagine my shock when I just found what I got from the ATO from the scumbags from Rubicor!!

Rubicor liquidators (for $1.75 million) wade through a clusterpuck

Rubicor creditors stare into the abyss of incompetence and debt