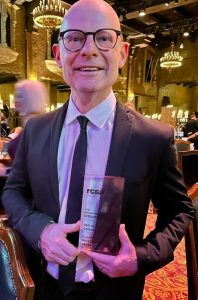 After the eleven award winners had been announced, RCSA CEO Charles Cameron took to the lectern to announce an award that was not listed on the program.

The CEO’s award for Outstanding Contribution recognises “an individual who has donated their time and demonstrated outstanding dedication to the industry and our association.”

When Charles announced me as the winner I was genuinely shocked.

I contribute to the industry because it’s in my family’s DNA.

My paternal grandfather was an ANZAC, landing at Gallipoli in April 1915.

My maternal grandfather provided 29 years of service to Clarence Football Club as a committeeman and administrator.

My maternal grandmother was made a Life Member of the Lindisfarne Mother’s Club for her services to local families.

My father was, among other things, President of my high school Parents & Friends Association.

My mother has served on the Ladies Committee of the Tasmania Golf Club for many years including two terms as President.

I contribute because I get more out of contributing than I put in – I meet newer members, I learn about different aspects of the industry I was never exposed to when I was an agency recruiter and, mostly, because I believe that as an industry we are stronger together.

When people like me volunteer their time and skills to the RCSA we do so in the hope we will make a difference, even a small one, in building the industry’s credibility, professionalism, and broader community reputation.

Attendee and presenter (#) at another 8 conferences

I have been a consistent and vocal promoter of RCSA membership, events, professional standards, and ethics via the RCSA Journal, Recruitment Extra, my own blog and many other third-party blogs and publications with such topics such as one-sided hit pieces from the mainstream media,  slave labour, industry strength in numbers, incoming RCSA President profile, incoming RCSA CEO profile, women’s advocacy, industry compliance, industry innovation, Code of Professional Conduct, RCSA award winners, and many other related topics.

I have been in the recruitment industry for 33 years and contributing my time and skills on a voluntary basis to the relevant industry association for a large majority of those years.

Thank you, Charles (and the RCSA) for the acknowledgment.

I won’t be stopping for a few years yet.

Why a strong industry body creates a powerful industry

Leading through COVID: an interview with RCSA CEO, Charles Cameron 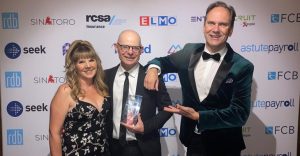 That’s awesome Ross. Congratulations and well deserved. Huge commitment to the industry and individuals within that industry. Your family must be super proud of you!

Thanks very much, Deb.

Well done Ross. Well deserved and well done to the RCSA for the recognition.

You certainly deserve the recognition Ross, thank you for everything you do to support all of us, and in turn those whom we support.

Thanks, David. Much appreciated.

Thanks for all you do, Ross!

Thanks very much, James.