The Australian labour market does not suffer from a shortage of workers; far from it.

Australia’s labour force participation rate is 66.6%, compared to our Kiwi cousin’s 71.7%. The vast difference represented by that 5.1 percentage point gap is 1.074 million Australian workers who are not current labour market participants.

The significance of this difference is contexualised by the following facts about the Australian labour market:

In other words, just under 2.1 million Australians want to work more hours than they currently work or want a job that allows them to surmount the main barrier preventing them from starting paid work.

Adding 2.1 million workers to the existing pool of half a million unemployed creates 2.7 million workers for 480,000 vacancies and provides a very different view of alleged labour market shortages.

The data proves Australia does not have a shortage of labour. What we have is a major imbalance in the labour market. What employers want compared to what workers are able to provide is a long way from equilibrium.

Being considered ‘too old’ by employers was nominated by 7.7% of workers as the main reason for their inability to secure a job or gain more hours.

Age discrimination appears to have a significant gender bias with more than twice as many men (10.9%) as women (5.2%) reporting age discrimination as the main reason for their inability to secure a job or gain more hours. No other difficulty came remotely close to having such a huge gender disparity.

As Bunnings proved, through the hiring of 87-year-old Harold, (who is still at their Canberra store four years later, at age 91) tackling age discrimination can provide a relatively easy way to secure more workers.

This was proven recently by a Victorian restaurant owner who went from desperately seeking staff, to having a full roster of employees, many of whom are keen to work more hours.

How did Barry Iddles, the 67-year-old owner of 360Q in Queenscliff on the Bellarine Peninsula, accomplish such a transformation in his staffing situation?

After the frustration of not being able to hire and retain the staff he needed through traditional channels Iddles sent 42,000 postcards to locals across the Bellarine Peninsula, Mornington Peninsula, and Surf Coast shires specifically asking retirees to consider a job at his restaurant.

Showing an astute understanding of the likely barriers experienced by his target market, Iddles’s postcard stated that any interested person should to come to his restaurant for a chat about the work and the hours on offer. No hospitality experience, or even a resume, was required.

As ABC reported this week:

“There is a labour shortage and a labour crisis, [but] I don’t have one. I have five too many staff at the moment. And I could actually open another venue to keep them all gainfully employed.”

Mr Iddles said he had received more applications than he could handle.

“I have another four champing at the bit to join our team,” he said.

He encouraged other employers to see through ageist stereotypes and give mature workers a go.

“Three of them had been out of the workforce for a long, long time. [They came] back one or two days a week, and they transition very quickly,” he said.

In another interview, published in The Age, yesterday, Iddles said older workers have “amazing life skills”, are well-groomed and punctual. “They’re amazing with people, customers love them.”

A small adjustment to his mindset has paid (and, I suspect, will continue to pay) huge dividends for Barry Iddles.

Traditionally many hospitality workers are young people using hospitality as a stepping stone to bigger and better career options; hence the high staff turnover. It’s highly unlikely that Iddles will be losing any of his mature-age workers to such opportunities. Staff stability significantly reduces training costs and improves productivity.

The latest data on recruitment difficulties suggests there is no respite in sight for those employers firmly wedded to their existing hiring paradigms.

In October 2022, the recruitment difficulty rate increased by 3 percentage points to 70% (see graph, below) of recruiting employers (representing 41% of all employers). This is the third-highest monthly result on record.

Flexibility in recruitment is especially critical in Barry Iddles’ sector with Accommodation and Food Services (78%) recording the highest recruitment rate of all sectors in the September 2022 quarter, followed by Health Care and Social Assistance (73%). Of all Accommodation and Food Services employers who hired in the September quarter, 69% reported hiring difficulties.

In the ABC’s report on Barry Iddles’s success in hiring mature workers, the Council for Older Australians chief executive Ian Yates said “Mr Iddles’s technique of specifically asking older workers to apply, was what was needed to show older Australians they were wanted and needed.”

It’s not enough for employers to say they want older workers to apply for vacancies, it’s imperative that an ‘open hiring’ attitude is adopted to encourage previously discouraged older Australians to put themselves forward for jobs they may never have previously done but are happy to be trained to do.

Let’s hope Australian employers take a big leaf out of Barry Iddles’s hiring playbook before they next complain about labour shortages. 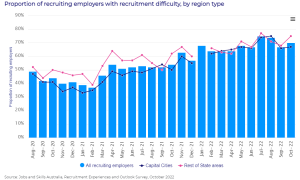 Is there really a ‘skills shortage’? A tale of two interviews

Demographics guarantee a vacancy boom for years to come