Last Friday industry news service, ShortList, ran a story (subscriber access only) on the struggles being faced by hospitality recruiters in finding sufficient staff to meet the demand from employers.

The following from the ShortList article summarises the problem perfectly:

(Frontline Hospitality Sydney agency manager Stephen) McGuire also noted salary packages for kitchen roles still aren’t as attractive as they could be to candidates, even though clients have upped their offering to combat shortages.

I have a great deal of sympathy for these recruiters because they are dealing with a difficult situation that is not of their making.

I squarely put the blame on the employers. These employers are complaining about a lack of staff yet the solution is staring them in the face.

This week, thirty-three years ago, I completed my HSC Economics exam which tested me on one of the fundamental principles of economics: demand and supply (represented by the graph below). 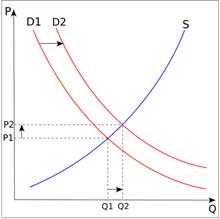 As is clearly the case with the supply of skilled hospitality staff, the supply curve has not shifted (or not at a rate proportionate to demand) so when hospitality employers attempt to find the staff they need at the ‘old market’ price for labour, they come up short.

Even when salaries increase, as per the example Frontline’s Stephen McGuire mentions, they don’t rise sufficiently to meet demand.

If employers don’t wish to pay higher prices, they have to play a part in increasing supply. This means employing more (chef) apprentices and other levels of hospitality staff at the bottom of the skill ladder, and training them.

The short cut way to increase supply in the labour market is to bring in supply from other labour markets. In Australia we have the following major ways in which that can be done:

Chefs have been removed from the 457-visa skilled occupancy list and as a result the options under (iii) have been dramatically reduced.

As the Federal Department of Employment clearly recognises the self-inflicted problem created by the Australian hospitality sector in a recent report The Skilled Labour Market: A pictorial overview of trends and shortages (page 16).

A number of Trades have been in persistent shortage for most of the last decade; particularly those in which pay and working conditions are relatively poor (such as the automotive and food trades).

Improving pay and conditions are factors over which any employer has complete control.

Recent international examples show that major companies understand their own role in the supply side of the labour market equation. Earlier this year the world’s largest company (by revenue) Wal-Mart committed to raising store employees’ pay beyond minimum levels in order to reduce staff turnover and improve customer service.

Two weeks ago German retailer, Aldi, followed suit in the UK with an announcement that, in February 2016, they will increase their employees’ minimum hourly rate to £8.40, £1.70 above the national minimum wage making Aldi the highest paying of the UK’s ‘Big 4′ major retailers.

As I highlighted earlier this year, far too often major employer groups are quick to complain about how hard things are without being prepared to look at what responsibility they have for the being the architect of a potential solution.

So hospitality employers, what are you prepared to do to be the architect of your own solution?

I call BS on employer groups: Get better rather than want things to be easier

How fools recruit: I’ll know them when I see them

Hi Ross, interesting article. One of my immediate family members is a Director and Shareholder in a large hospitality company in Sydney with over 800 staff – a blend of permanent and temporary – large enough to negotiate their own collective bargaining agreement. Over a beer one day , we were chatting about staff and how he found them and generally word of mouth through the transient work force furnished alot of options, as did people from regional areas. I asked how he managed penalty rates ( I was with Qantas as a shift worker for 7 years in Sydney, and knew it must sting them ) and his response – some places we do not open as it is not worth it ! He cited one example of having to pay a glassy ( the guy who cleans tables and picks up glasses ) over $60 per hour on public holidays, so can only imagine more senior staff and chefs and managers etc – and when you have 800+ staff the wages bill must be eye watering – and that is with their independent bargaining agreement being better than the ward , but still fair. Is the problem the recruiter or is it the fundamental expectation people have? I fear the latter , and employers can't be expected to then on top invest in training what is a transient workforce, all the while the average consumer wants everything cheaper – nice article but I suspect only scratches the surface of an industry having to meet price expectations of consumers as well as wages expectations from workers

Thanks for your valuable and considered comment, Hugh. I agree that there are a number of factors at play in this situation. Whether market expectations are aligned with reality is a topic with many paths to explore! Employers will ultimately reduce their opening hours if it is uneconomic otherwise and consumers will have to either accept it or be happy to pay higher prices. I suspect the culture of leadership (or lack of it) has a large part to play in staff turnover and skills shortages within certain employers or certain industry sub-sectors.

Thank you for your newsletter, which as always is very informative.

One point, chefs/cooks have not been removed from the 457 list. The link source is old data, and you can refer to https://www.border.gov.au/Trav/Work/Work/Skills-assessment-and-assessing-authorities/skilled-occupations-lists/CSOL for the most uptodate 457 list.
(chefs/cooks in a fast food/takeaway shop are excluded)

Therefore, your option 3, “Sponsored Skilled Labour” is still a valid option. However, there are minimum salary/condition thresholds applicable, (minimum & market salary), which further enhance your argument for hospitality employers to improve pay and conditions. Absolute minimum for both these occupations currently is $53,900, although there are proposals for a concession on this. Below is a further article from the Migration Institute of Australia (MIA):

Hospitality sector’s deal over 457 visas to attract foreign workers
The hospitality industry is looking to attract more foreign cooks, chefs and other staff to Australian restaurants after striking a deal with the Government to make it easier to bring in overseas workers through the 457 skilled migration visa program.
Restaurant & Catering Australia said it had reached an “historic” agreement to address “chronic labour shortages gripping the hospitality sector”, which involves lowering the temporary skilled migration income threshold by 10 per cent.
“This moderate concession means it will be more feasible for operators to hire overseas workers, should they be able to demonstrate they have experienced prolonged vacancies in their businesses,” John Hart, R&C A chief executive, said today.
Hospitality businesses were facing a “critical” time and “extreme difficulty finding staff”, with an industry-wide shortfall of 56,000 workers, Mr Hart said. See article in The Australian: http://www.theaustralian.com.au/news/nation/hospitality-sectors-deal-over-457-visas-to-lure-foreign-workers/story-e6frg6nf-1227463921359