The resulting publicity was a nightmare of epic proportions (just search ‘Michael Page ski weekend’ to see how widely it was covered).

As you can read from an anonymous comment on my original blog about this incident (22/07/2016), it appears that the ‘impact’ made by some (or all) of the 22 Michael Page employees that weekend at Mt Buller wasn’t just confined to Stephanie Sparrow and her father (managers of Reindeer Ski Lodge where the 22 were staying). It seems that the behavior of some (or all) was noticed by many other staff working at Mt Buller that weekend.

I wasn’t there. I don’t know what happened but Michael Page don’t deny the incident, making the following comments on their Facebook page:

It is however clear what impact the behaviour of those 22 Michael Page employees had on Stephanie Sparrow:

‘….the legacy left by Michael Page Recruitment at Reindeer Ski Club, it’s one of verbal abuse and alcohol-fuelled violence.

For me, the name Page recruitment will bring forth memories of being abused by men and being left to fear what harm may befall myself and my family at the hands of your staff.’

As I mentioned in the previous blog on this topic, the Michael Page Australia website lists White Ribbon (‘male led campaign to end men’s violence against women’) as one of the charities they support. When I contacted White Ribbon, their PR person, Selena O’Hare, assured me that Michael Page was not an accredited White Ribbon Workplace.

Given the specific nature of the allegations made by Stephanie Sparrow, I would have expected to see Michael Page announcing their intention to become an accredited White Ribbon Workplace as an obvious step to take in mitigating the fallout from this issue; clearly not in the eyes of Michael Page executives.

Michael Page had two clear choices in the way they could have handled this PR disaster:

‘… initiated planning for an internal training program …’ must be the most laughable statement of non-action I have ever read.

Although in an earlier post, Michael Page stated ‘We have directly been in touch with the people who were affected by the behaviour of the individuals involved and offered our unreserved apologies.’ they fail to say specifically, to whom they apologised and what restitution (if any) has been made to the ‘people affected by the behavior of their employees’.

They fail to say whether Stephanie Sparrow and her father are satisfied with the disciplinary action taken by Michael Page.

Michael Page have failed to acknowledge that very senior leaders of Michael Page Australia (which includes Page Personnel, Page Executive and PageGroup) were within the group of 22 who attended the weekend (despite two of those senior leaders being named in various social media posts). 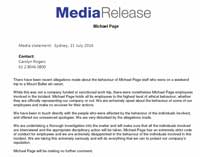 In short; close ranks and hope this blows over quickly.

No doubt Michael Page Australia brought in a crisis management expert from their PR agency to advise on responding to a screw up of this magnitude. It is unknown what this person recommended to Michael Page. What is clear is that the second option (see 2. above) was chosen.

In doing so, Michael Page have taken a risk, a very big risk. As a publicly listed company, the risk is even greater. They are gambling that the ‘small target’ approach will be vindicated by the issue blowing over.

This high risk strategy assumes that clients and candidates won’t take any action of their own to demonstrate their displeasure at the anti-social behaviour of their supplier’s employees and/or their unhappiness with the public response of their supplier’s leadership.

Large contracts, especially government contracts, always have catch-all clauses about supplier conduct and, in almost all cases, give the client the right to suspend or terminate the supplier for, shall I call them, ‘moral’ reasons, not necessarily related to the performance of the services or products being supplied.

Just imagine if Michael Page was, via a ‘morals’ clause, banned by one major client from providing any services for, say, 90 days?

What if that client, after 90 days, decided to extend the suspension? Or terminate the contract altogether?

Just imagine another client went further and terminated their contract with Michael Page and, for example, ordered the transition of all Michael Page temps and contractors to another supplier or suppliers?

Just imagine if Michael Page had a team of, say, 10 -12 people, serving this contract, who suddenly find themselves with no work to transact for the next 13 weeks?

What might that type of action do to the company’s local results and staff morale?

You just never know what unilateral action clients of any size, might decide to take.

‘2016 is our start up year and one that will see the FutureYou team embark on the journey to grow to more than 100 specialist recruitment consultants across a number of functional areas of expertise in Sydney and Melbourne.’

In Meyer’s place, Michael Page appointed Matthew Gribble as Regional Managing Director, Australia and New Zealand. Gribble had big shoes to fill. Under pressure, due to the departure of senior Michael Page consultants to join FutureYou, Gribbles’ first year would be a critical one in demonstrating he was able to rise to the challenge of replacing Meyer.

PageGroup Global CEO, Steve Ingham and Executive Board Director – Asia Pacific, Gary James also had a lot at stake given the importance of the Australia & New Zealand region to the group’s overall financial strength (2015 results: Asia Pacific was 19% of group revenue, 24% of group profit).

When the fallout from the infamous Michael Page ski weekend of 9 and 10 July hit the proverbial, Gribble was nowhere to be seen, Ingham made no public statements (apart from two bland responses on Twitter) and James did not comment publicly.

It is in difficult and embarrassing times such as these that you see what true leaders are really made of.

Where was, and where is, the true leadership at Michael Page?

This leadership vacuum has not only let many people down, it has tarnished recruiters’ careers and the recruitment industry as a whole.

The Mt Buller staff impacted by the behaviour of the Michael Page employees have witnessed a token response from the senior executives at Michael Page.

The real losers out of this leadership vacuum are the hard working and committed Michael Page consultants who either were not in the party of 22 at Mt Buller that weekend or did attend and kept their behaviour in check.

These (hundreds?) of Michael Page consultants are now suffering from a drop in work flow, loss of key accounts and candidates, dispiriting company morale and the acute discomfort (embarrassment even) of working for a tarnished brand; not to mention the almost-certain hit their future bonus payments are likely to take. All of these consequences were not of their making yet these core consultants will almost certainly bear the biggest cost of this fiasco.

True Leadership: You don’t know who has it until the white powder turns to sludge as you slip and fall.